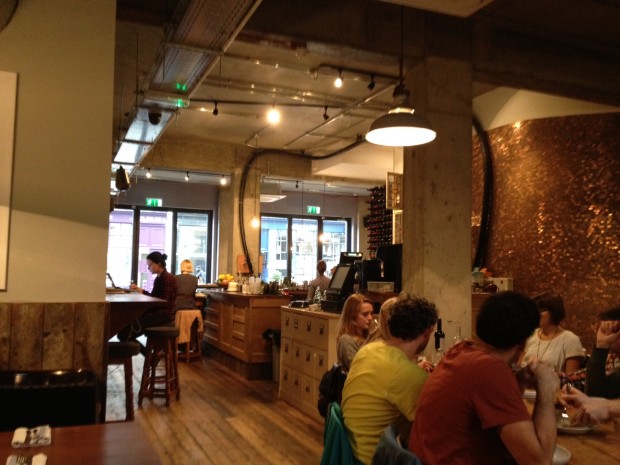 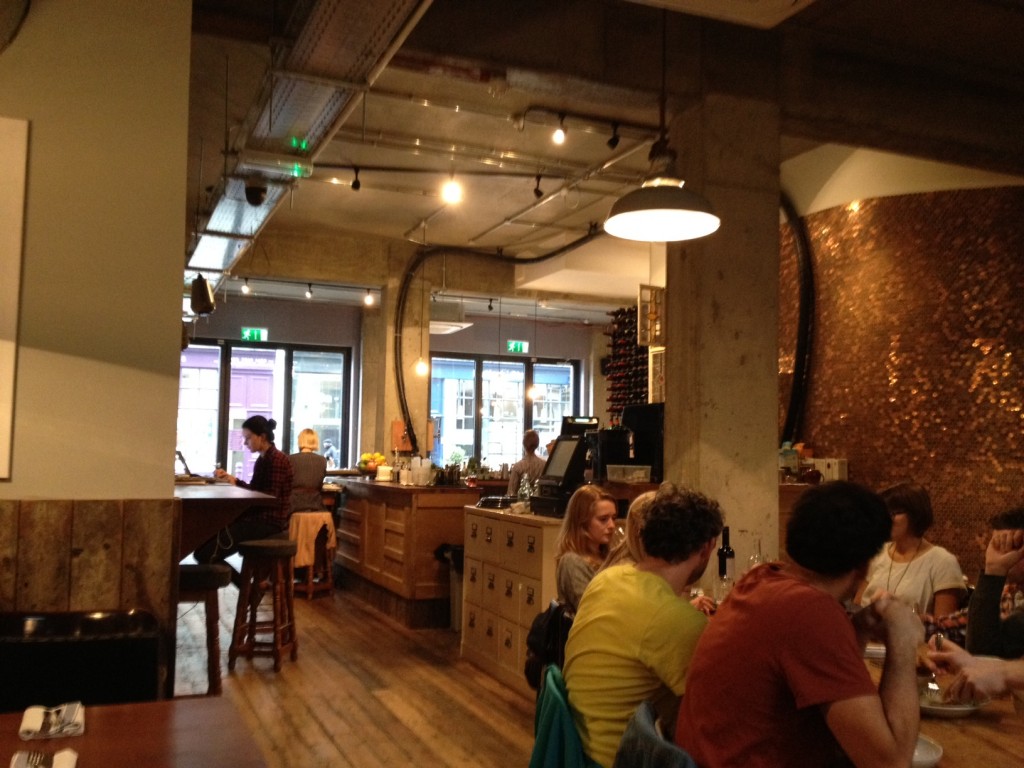 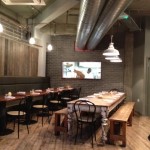 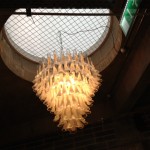 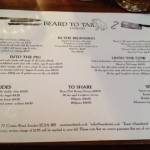 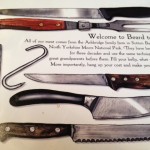 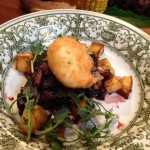 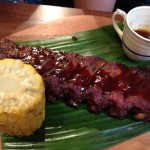 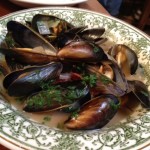 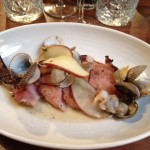 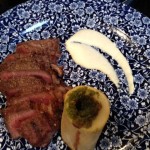 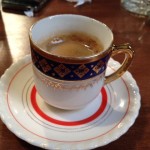 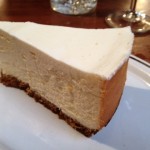 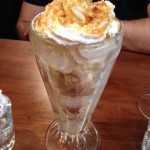 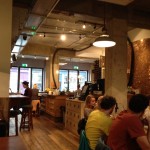 The venue itself looks like a top-end gastro pub.  On entry, you are greeted by a good sized L-shaped bar, leading you into an irregular dimensioned dining room with an eye-catching light fixture combined with two large, industrial silver pipes running across the ceiling.

Our table for four had folding theatre seats along one side and regular seats on the other.  Once seated, the paper menus had illustrations of knives on one side and two very distinct choices on the other – into the pig, or into the cow.

Nose to tail eating at the Beard to Tail in Shoreditch

The menu informs us our choice of ‘pig’ or ‘cow’ comes from the family farm on the Yorkshire Moors National Park. I liked this touch, as it’s always enjoyable when names and places prefix the choices on offer. Unlike the overrated St. Johns, Beard to Tail (with the exception of the name of course) doesn’t continually shout about it being nose-to-tail eating, but that’s exactly what it is.

For starters we ordered 5 dishes to share on the table. The first dish was the mussels and smoked bacon, which we had with the suggested accompaniment – a pint of Copperhead Ale – for £10 p.p. The muscles were a good size, served in an ornate, shallow bowl with a very impressive sauce.  GLC tip: the ale is a must!

At this point a formidable rack of BBQ ribs served on a wooden block arrived. Our initial concerns about the dish looking too filling were immediately dismissed as the ribs melted in the mouth. So much so, they were a definite GLC favourite for one of our diners.

Next came the baked bone marrow mixed with green herbs, which I must say was a little strange. We struggled with the gelatinous bone marrow married with the harder, crustier texture of the herbs. Undeterred we tucked in to our final starter of pigs trotter stuffed with bacon, sage and onion with pickled cabbage. Needless to say it was a taste sensation, with every ingredient working with the others in an understated, but very effective way.  order Soma WITHOUT SCRIPT

With a healthy pause for breath, accompanied by another Copperhead Ale  (which was slipping down rather well) our mains arrived in good time. The sweet cured saddleback pork chop with cockles, sage and apple (at only £14.75) looked and smelt fantastic; the sweetness of the pork along with the cockles is a good combination.

The one down point was that the chef had decided to cut the chop up in diagonal sections, which was unnecessary and not appreciated. The same treatment was applied to the 28 Day aged Longhorn rib-eye which, given the calibre of the meat, was even more offensive. Putting this ‘mothering’ gripe behind us, we demolished the dishes and in all fairness they couldn’t be faulted for flavour.

For desserts we opted for the bread and butter pudding served with ice cream which was delicious, the cheese cake, which was light, creamy and full of flavour (definitely one I’d re-order). Lastly, the ice cream with salted caramel, which if I had to choose, would be the winner.

Overall the Beard to Tail is on par with, if not better than St. Johns. In my view the dishes are more interesting and they are a lot cheaper. I also preferred the ambience, as it is more relaxed. The only thing to watch out for is the service, which was patchy, although this could just be down to it being new staff in a new restaurant and will probably improve over time. I just hope they stop cutting your food up.