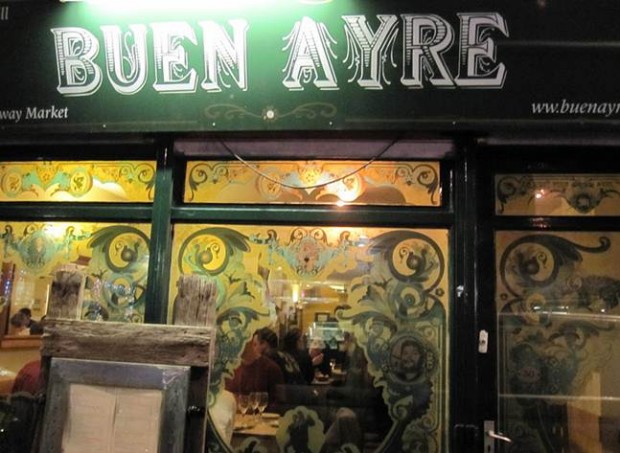 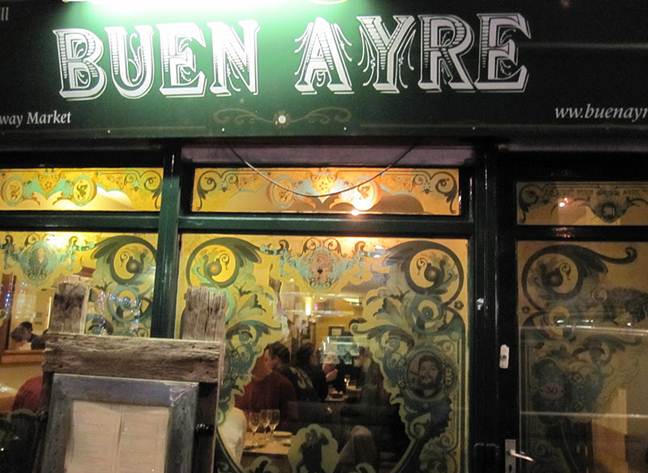 When reviewing Buen Ayre, it is hard not to smile. Why? It was at this most Argentine of eatery’s that the first ever gathering of the GLC took place; a gathering that we now know was to become the dawn of a new era of male dining. The basics kernels of the idea to form a Gentleman’s Luncheon Club had happened a few months prior. Two of the would-be founder members, myself and Liam, had been envious of Liam’s wife’s rather regular ladies lunches, and so it was during a visit to Buen Ayre that we thought we’d build our own version.

This, however, was not the only reason for choosing the restaurant as our inaugural GLC dining experience. The fact is that money talks. As you’d imagine, being very enthusiastic to kick off official GLC proceedings, the six founder members decided to hold our first ever GLC with only two of the proposed three months financial credit to hand. Given this financial limitation – plus the added bonus for me that Liverpool Street station is a direct train home to Southend – so it transpired that six very excited mid-30’s men met at a pub, decked in jeans, shirt and suit jacket and headed North East to enjoy that most ‘gentlemanly’ of meals, steak and wine.

Buen Ayre is a 10 minute taxi ride from Liverpool Street, situated in the rather earthy Broadway Market area of Hackney. In my view this is part of the charm. With Buen Ayre the food, wine and atmosphere can best be described as the ying to Gaucho’s yang. On arrival at the small green shop front, and after a lively greeting from the Argentinian waitress, it’s clear that this is a place to enjoy yourself, to be a little bawdy, but without losing the expectation of great service and great food. The tables are surrounded by old wooden school chairs; a nostalgic touch which brings real warmth and character. The six of us, having already racked up a few Argentine lagers, wanted a decent Malbec and Buen Ayre does not disappoint. The list of Mendoza’s and Malbecs is superb. Choosing from a mid-range all priced between £15–30, we decided that actually the house wine would be acceptable; it is after all a Malbec.

Our waitress recommended the Parrillada Deluxe. This platter consists of sirloin, rib-eye, black pudding, sausage and that wonderful melting goodness that is provolone cheese. This comes in at £26.50 and if you add a side order of chips and salad, you’re looking at a very reasonable £30 per person, minus booze of course. The platter comes out on a sizzling hot plate and is shared between two people. Cooked to perfection, this is a true meat feast. Having seen the chef working on an open grill simply adds to the excitement. And watching the provolone bubble and melt whilst scooping onto a fork resplendent with black pudding is a very satisfying scene.

Buen Ayre is simplicity, and I for one enjoy the delight of simple but perfectly cooked cuts of Argentine steak. It isn’t carbon friendly; the restaurant imports its wine and steaks directly from Argentina so if you prefer locally sourced meat then Buen Ayre isn’t for you. The platter is hefty – so don’t go if you are on a diet – and it goes without saying it is not a place for vegetarians. We did of course stay for dessert, which I regret to say is Buen Ayre’s only downside. The Don Pedro aside (ice cream doused in whisky) the puddings are a disappointment. But then again you wouldn’t go for a Chinese meal for the lychees, would you? Buen Ayre is never going to be a Michelin star restaurant, nor should it be; it is about atmosphere and simplicity, great food and value-for-money. 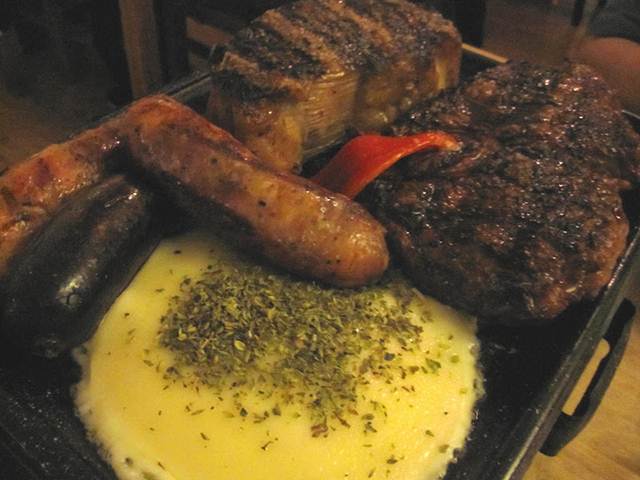 I also think Buen Ayre is nice antidote to the more populous and well-heeled steak restaurants that have exploded over London over the past decade. Its Hackney-home and its down-to-earth feel mean it is much more relaxed than a Gaucho. The food is comparable if not better, it’s cheaper and it’s a bloody good laugh, which for six men desperate to start the GLC, was a no-brainer.