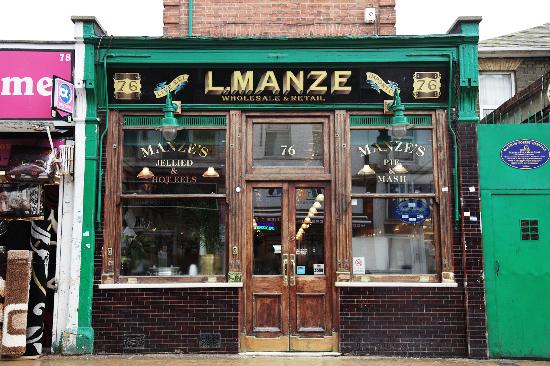 Walthamstow’s El Manze eel, pie and mash shop opened in 1929 has been awarded Grade II-listed status by English Heritage inspectors because of its traditional features and ‘exceptionally complete interior’. Roger Bowdler of the English Heritage, said, “eel, pie and mash shops are a unique feature of the London scene and represent some of our oldest traditions of fast food. This 1920s example with its beautifully preserved interior is among the best of an increasingly rare kind and strongly deserves to be listed.”

From Southern Italy to Bermondsey

The Manze family arrived in Bermondsey from Southern Italy in 1887, and Michele Manze established the first El Manze eel, pie and mash shop in 1902 after realising a need for more substantial food in post-Victorian London. Since then El Manze has served traditional eel, pie and mash using the same recipes and liquor as were used in 1902.

Following the success of the first eel, pie and mash shop on Tower Bridge Road, several of Michele’s brothers followed his lead, and by 1930 the Manze family owned 14 pie and mash shops across London. However, many of these shops have since closed down or been taken over. Walthamstow was the 14th shop to open by Michaele’s brother Luigi, who employed the architect Herbert Wright to create the interior and exterior that exists today. Culture Minister Ed Vaizey, said, “the restaurant was a unique piece of London’s architecture and still exists for its original purpose. Pie and mash shops are as intrinsically linked to London as black cabs and beefeaters. L Manze’s in Walthamstow is a unique part of the capital’s heritage and is as relevant and popular now as it was when it first opened in the 1920s. It clearly deserves to be given Grade II-listed status.” Only 30 traditional eel, pie and mash shops still in existence

Or visit the El Manze site at: www.manze.co.uk