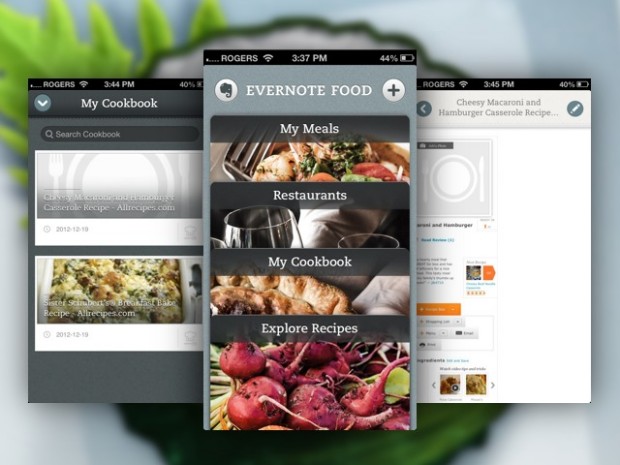 Remember the food you love with Evernote Food Those of you familiar with Evernote will already know this is one of the most popular and easy to use note catching apps available. Now Evernote have released Evernote Food 2.0, designed to, “discover, collect and preserve your most memorable food moments”.

Record and search recipes and restaurants

The app is based on users inputting their favourite recipes and restaurants to both keep them as a personal notes, and to make those notes searchable for other Evernote Food users. Thus creating a rich source of information. The navigation of Evernote Food is broken down into four categories:

1. My Meals is for documenting your favourite ‘food moments’ that can be tagged with photos, captions and locations

2. Restaurants is a geographical list of nearby restaurants along with the facility to search restaurants by name and location. The ‘search’ part of the app works well. I tried a Gentlemen’s Luncheon Club favourite, Rules, and the general information appeared. However, this is where the app falls down as neither the map or the associate images were clickable. The other thing I noticed was the odd telephone numbers which looked like a tractable telephone number (i.e. they can record how many time a number is clicked and called). As the app is powered by Four Square, I’m sure there’s a hidden remuneration model in there somewhere.

3. Cook Book is similar to ‘my meals’ being a collection of ‘clipped’ recopies (the actual ‘note’ part of the app)

4. Explore Recipes is the recipe equivalent to the ‘restaurant’ section, allowing you to search all available recopies

Is Evernote Food a wolf in sheep’s clothing?

Like most people I consider myself to be relatively tech-savvy and I struggled with the initial proposition for Evernote Food. The reason I struggled is because it’s slightly over complicated (a simple search and clip function for both restaurants and recipes would have sufficed, meaning two sections and not four). Also, the app is clumsily positioned search engine relying on your input to generate content to be monetised by a sub-standard marketer (notice the small ‘m’). Evernote Food should be a useful app, but in reality it’s a bit of a let down and there are much better sites/apps out there to search and hare your food experiences.