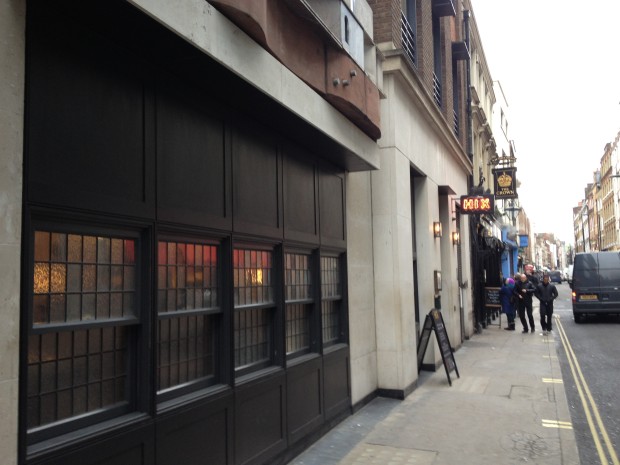 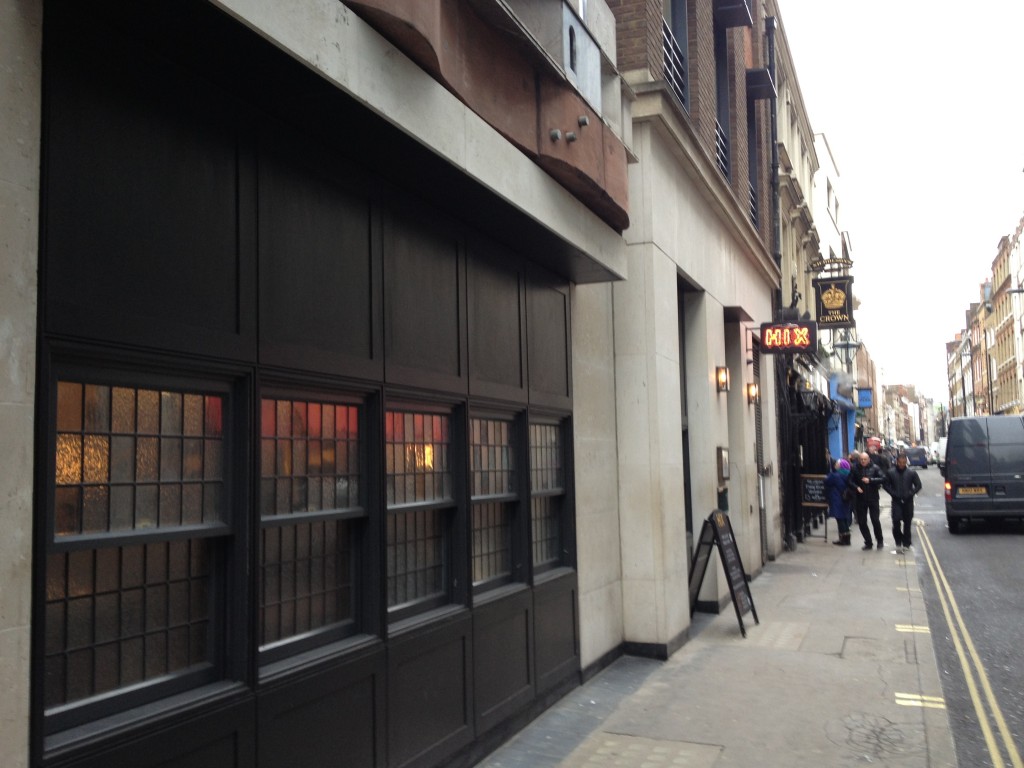 This was my second visit to Hix, the first being Hix in Smithfield’s last year, which lured us with the promise of seasonal, British cuisine. The last visit didn’t disappoint, so I was very much looking forward to sampling the delights of Hix Soho. Located in Brewer Street, Hix Soho is a stone’s throw away from the bustling Piccadilly Circus. A red neon red sign and Ivy-like windows beckon you towards the wooden door that is typically Soho – covert doors leading into spaces for ‘those in the know’.

Inside Hix Soho has carved out it’s own identity. In a departure from the chophouse, butchers-shop ambiance of Hix Smithfield’s, the Soho restaurant takes on a more stylish persona. Art hangs subtly from the walls and ceiling, the long mirrored bar area is framed with the odd splash of neon lighting and hanging orbed lighting – it’s a fitting ode to the Soho surroundings. 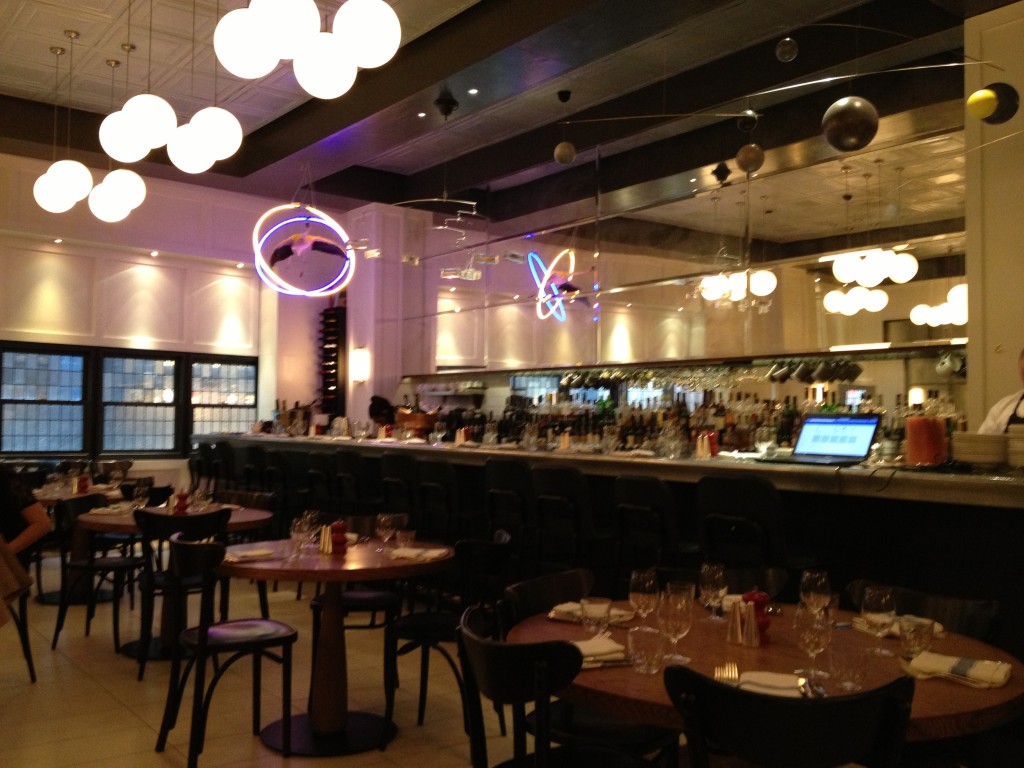 The space itself is quite large and the wooden tables are well spaced throughout the room – in places perhaps a bit too isolated. Whilst it’s always nice to have your own space, it’s also nice to be in relative contact with your fellow diners, and our table did feel slightly separated from the rest of the restaurant.

One of the good things about Hix is the fact the menu changes frequently. Whilst the old favourites such as ‘heaven and earth’ remain, Hix takes great care to serve seasonal dishes sourced from across the British Isles all through the year.

Our attentive waiter took great pleasure in explaining the new dishes and specials that made us all change our minds two or three times. Our initial choices were thrown into further turmoil when the meat board was produced. A la Gaucho a series of cuts were presented on a large wooden board and all dutifully explained. Unlike the Gaucho, Hix meat is grass fed and a lot of it is cooked on the bone, which helps to control the transfer of heat during cooking to stop the meat shrinking or toughening up. 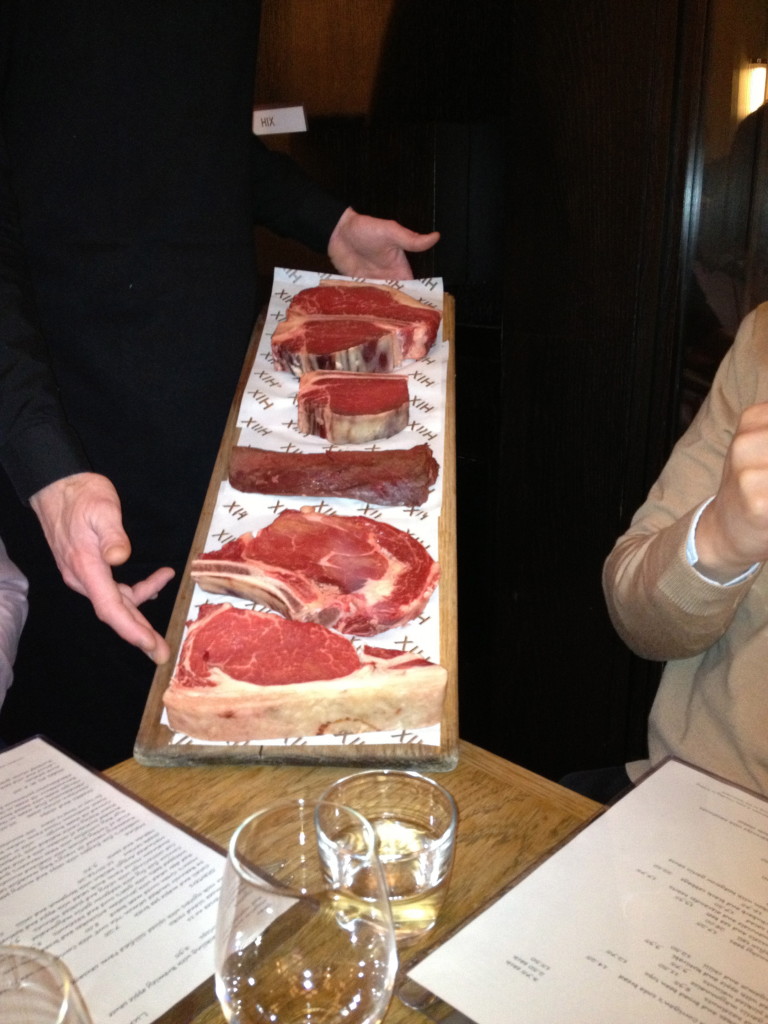 After much deliberation, and a portion of crispy, pork crackling, we decided to start with a dozen native oysters and a half pint of Hix stout. The oysters were a good size and served with a slice of lemon, as Hix believes Tabasco and other assortments will interfere with the true taste of the oyster. Suffice to say we learned this little factoid when one of our table asked for some Tabasco. 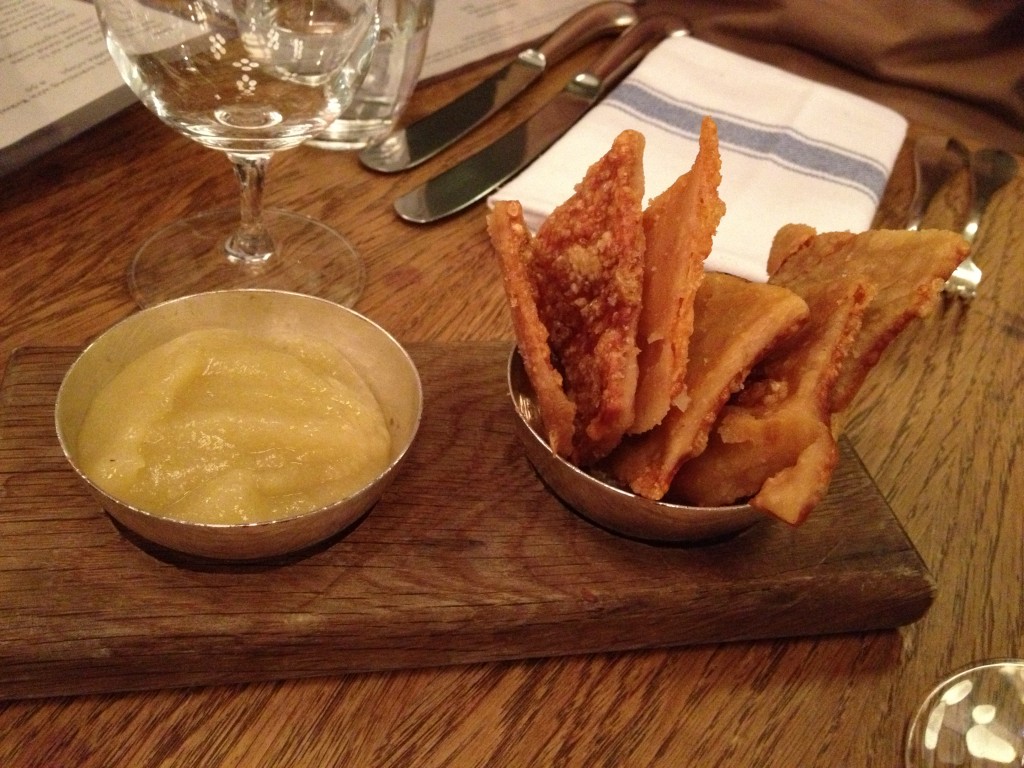 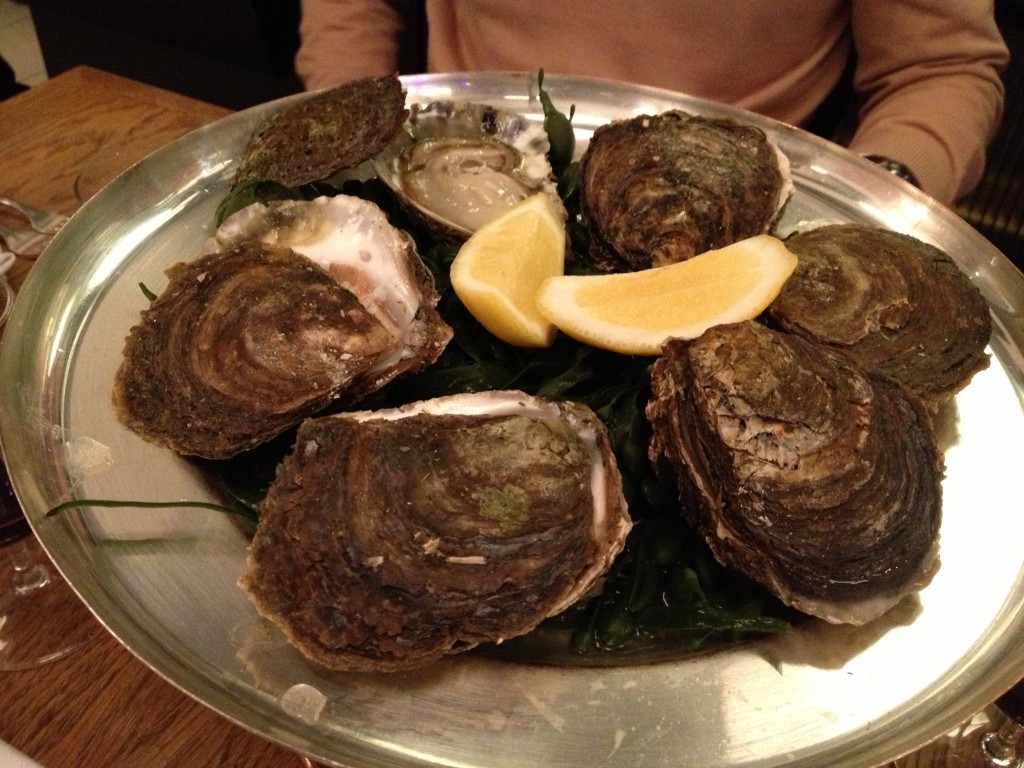 Regular readers of the blog will know, there are a few constants to the GLC, namely: booth dining, martini’s, port fines and eating black pudding. So it was an easy decision to order one of Hix’s constants, ‘heaven and earth’ that is effectively a ball of black pudding on a bed of mash. Without exaggeration this is one of the nicest dishes I’ve ever tasted – absolutely nothing could improve it. The black pudding was moist and flavoursome without being overpowering. The mash was lightly infused with herbs and the dish was topped off with a little bit of sauce. I could eat this every day of the week and never tire of it. The two other starters on the table were the steak tartar, which was also exceptional, and the duck salad, which was disappointing ordinary in the presence of two heavy weight starters. 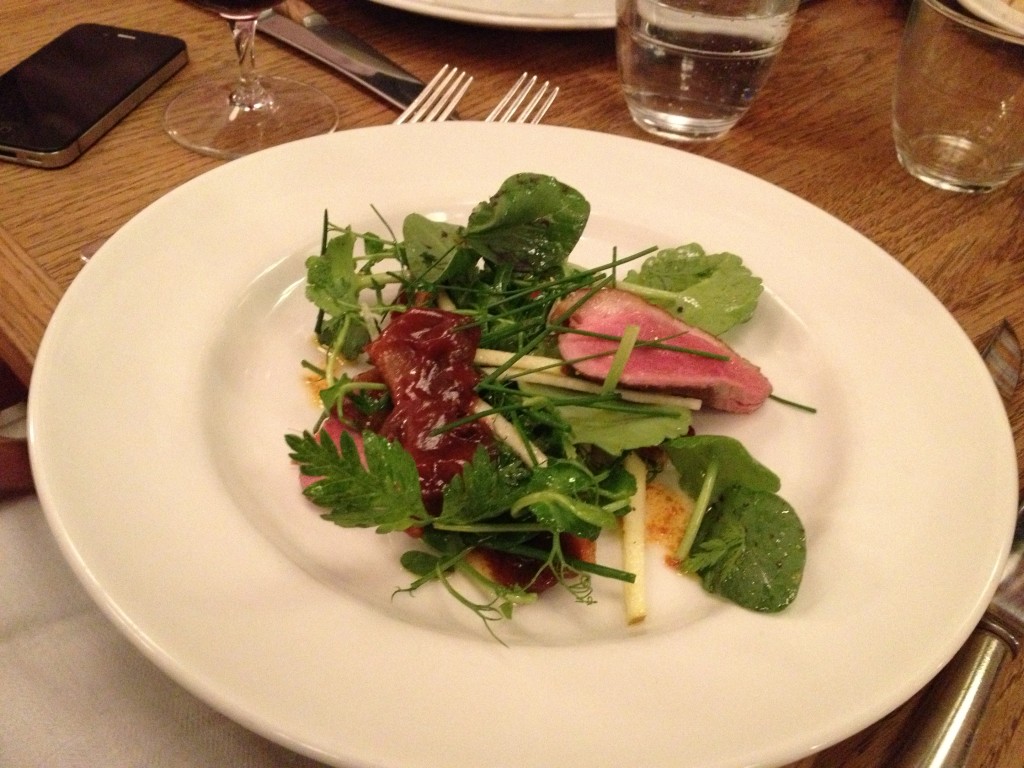 For mains I opted for the ‘more economical’ hanger steak. In the words of Hix, “It’s not the most tender but has a great flavour due to the way it hangs close to the kidney.” The meat was served cut (which I still have a bit of a problem with) and a sizable amount of bone marrow. As described the hanger steak is very flavoursome, the texture is slightly courser than more popular cuts and it has a powerful gamey taste. Whilst I couldn’t finish all the bone marrow on the plate (I find it a bit too gelatinous after a while), it was a good choice of mains. The other two mains orders were the sirloin that was,  ‘exactly as it should be’ and the monkfish, which was a sizable dish to say the least. 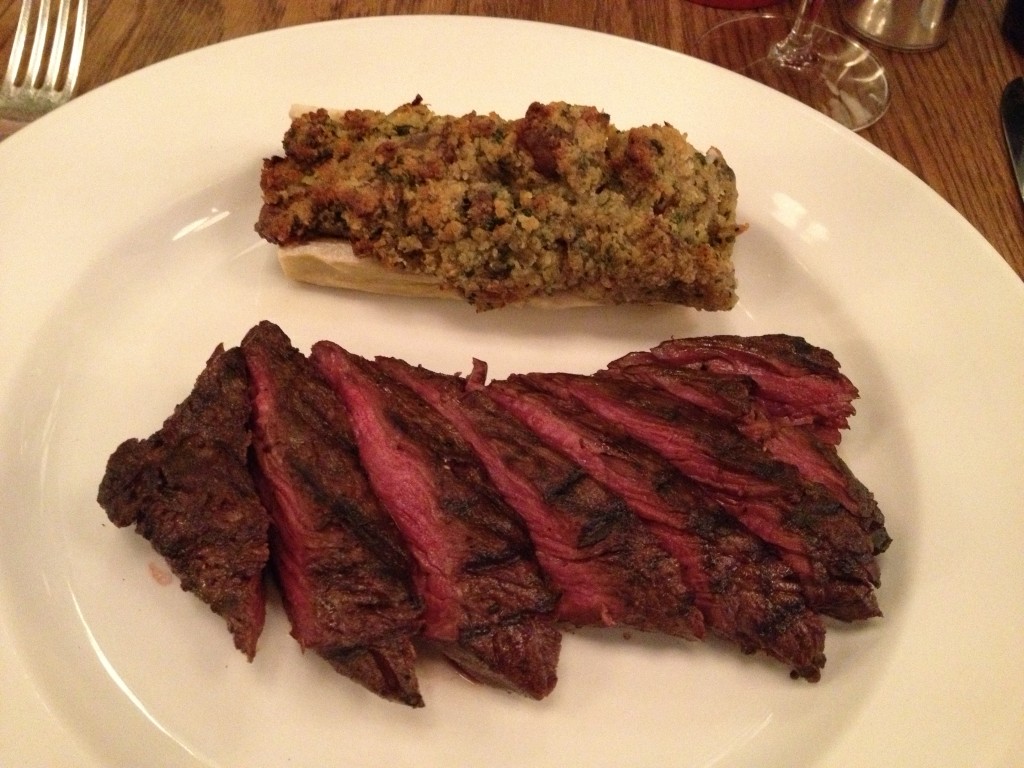 Due to some time pressures we opted out of desserts and a couple of us retired to ‘Mark’s bar’ in the basement. To quote Hix again, “even if we do say it ourselves, Mark’s is one of the coolest bars in London.” Whilst I’m inherently nervous about anyone describing anything as ‘cool’, I have to say this is a nice bar… Full of leather chesterfields, smoky mirrors, ambient lighting and a slightly sunken cocktail bar, this is a dangerous place to be. 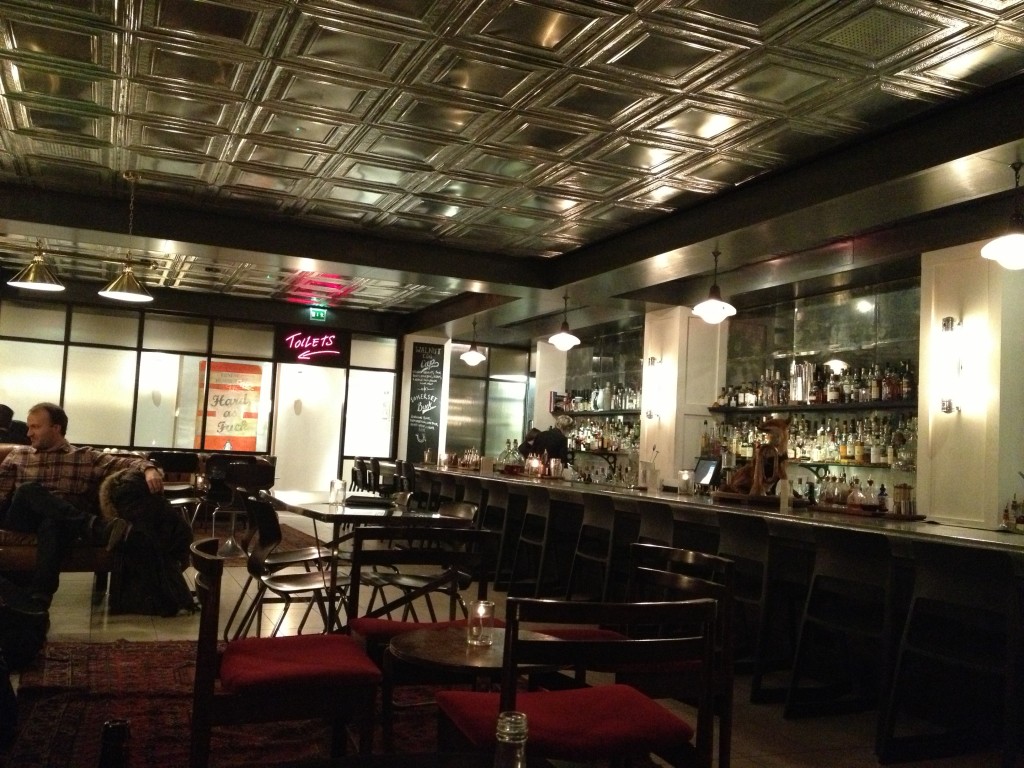 Following a couple of bottles of ‘smog rocket’ – a light stout from a micro brewery in Camden we were introduced to the Fox. Hix’s mixologist Lee Potter Cavanagh has created a Hendrix Gin and Champaign based cocktail, served in a punch bowl accompanied by a stuffed fox. Note to self; after consuming stout and red wine, never be tempted by an alcoholic fox with a punch bowl. Lovely though the cocktail was we quickly realised we’d reached our Arnhem and sensibly decided to leave graciously while we could. 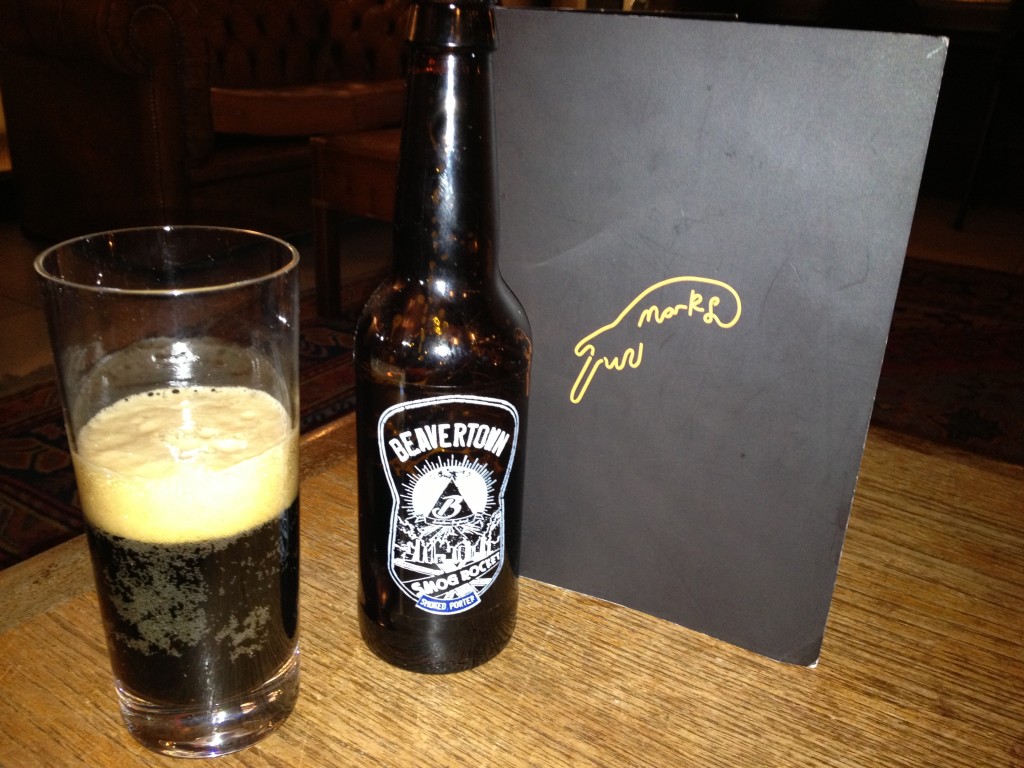 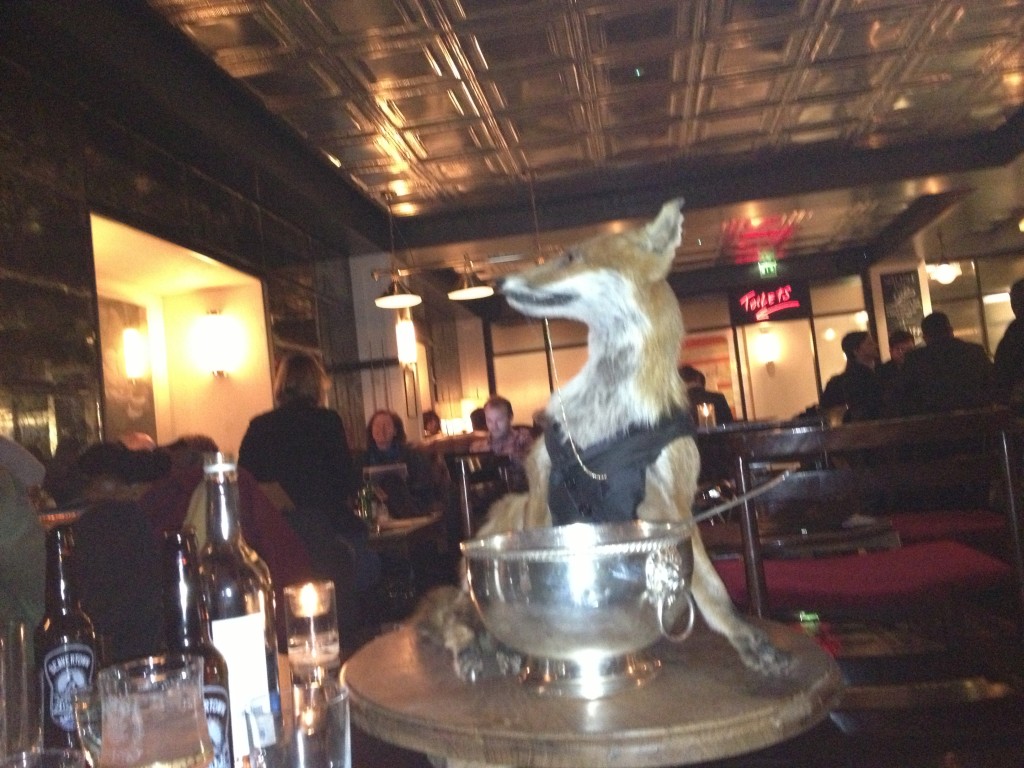 Putting our little adventure into the cocktail bar aside, my feelings towards Hix remain unchanged. The simple fact that the menu is sourced from the British Isles and it changes with the seasons will make me a regular. The starters were exceptional and although the mains were ordinary, they were reasonably priced, flavoursome and as a foodie it’s fun to explore different tastes. Saying that, for my next trip, I’ve already decided on the native oysters, ‘heaven and earth’ followed by the beef and oyster pie, and I’m very much looking forward to it! 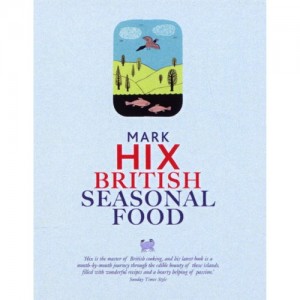 In British Seasonal Food, Hix provides  information on what seasonal foods to eat in a month-by-month guide. He’ll tell you where to source the best seasonal food, how to prepare and cook them, and suggests simple ways to serve them – to enjoy their flavour to the full. For each featured ingredient, he also presents a selection of inventive mouth-watering recipes.