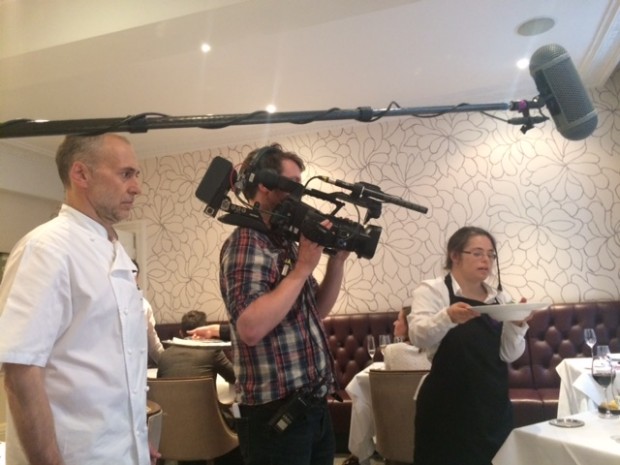 One of the GLC’s early outings was to Michel Roux Junior’s Le Gavroche. This trip engendered something of a group man-love for the twice-starred chef. Not only was the food on another level but Michel came out of the kitchen to do the rounds of the tables, chatting affably with the GLC and his other customers and making sure everybody was happy with their food. What a guy.

Roux also makes for great TV, as anyone who enjoyed his 6 years of Masterchef with Greg Wallace (and lamented the potato endorsement debacle that ended it), will know. So, when the GLC were invited to Roux Parliament Square to take part in the shooting of his new series Kitchen Impossible with Channel 4, we shouted an instant, grateful “yes”, without even trying to sound like our diaries were a bit full.

Roux’s C4 Kitchen Impossible series explores the challenges faced by people with disabilities when trying to forge a career in the hospitality industry. It does so by giving work experience to a group of people with a range of disabilities, in the Roux Parliament Square restaurant. I’m slightly ashamed to admit that the cynic in me briefly thought that Roux was looking to jump on the celebrity-chef-does-sociological-culinary-TV bandwagon which has improved school dinners, taught prisoners to bake, weaned the people of Rotherham off processed foods etc. However, my cynicism was thankfully banished after a few minutes chatting with the man.  This is clearly not a vehicle for self-promotion (not that those other programmes were either) but an attempt by Roux to use his influence for good ends. Moreover, Michel Roux doesn’t patronise or let philanthropic endeavour get in the way of the expected quality. He is certainly a good mentor but also refreshingly brusque with his staff when they make mistakes, treating them as he would any other employee. We were served by Jack and Sarah. Roux actually pulled Sarah off service half-way through the meal after too many strikes and had some stiff words with Jack, our wine waiter, who seemed on a one-man mission to get the whole restaurant slaughtered – at one stage we had 4 glasses of wine on our table for 2, all full to the brim.

Roux is committed though to developing the undoubted promise of Jack, Sarah and those behind the scenes in the kitchen. Which bring us to the food. While not quite up to the exceedingly high mark set by Le Gavroche, the food was still exciting, with great flavours and balance. Some of the aesthetics went a bit awry, such as the fantastically woody, smoky risotto which unfortunately was grey and vomit-like on the plate. The positives certainly outweighed any negatives though and the food was consistently delicious. We had a creamy pea tart encased in a deliciously crispy pastry, zingy mackerel with Isle of Wight tomatoes, reminiscent of the quality of ingredients and execution one finds at The Pig and some plump cushions of ravioli with slightly unnecessary but inoffensive popcorn. Our puddings didn’t disappoint either, with the gooseberry and elderflower cheesecake with blood peach sorbet stealing the show. So, check out the new series when it airs. We’ll likely end up on the cutting room floor but Kitchen Impossible is sure to be an engaging, emotional and fun journey. As for the restaurant, something about it’s architecture, location and decor meant that I didn’t warm to it in the same way as La Gavroche but any peckish parliamentarians, chartered surveyors or tourists who haven’t checked it out yet could do a lot worse!