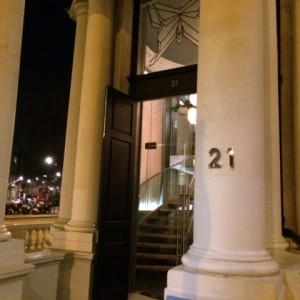 I have very little experience of eating Japanese food, save a drunken lunch at Nobu about 15 years ago and a rather ill-judged attempt at home made sushi a short while after, so it was with an open mind and a little trepidation that we entered the sparkling doorway of Kouzu in London’s swanky Belgravia. We were greeted very warmly and led up a winding staircase to a brightly lit, stylish mezzanine floor and seated at the sushi bar opposite 3 gentlemen in immaculate, crisp chefs’ whites all wielding fearsome looking knives and working together in a near-silent ballet of orchestrated concentration. Boxes of shining salmon, tuna and bream were passed back and forth, knives twirled and sliced with effortless ease. Each cut piece handled with the delicate touch of a master, each garnish ‘tweezered’ into precisely the right place. A dusting of seasoning here, the kiss of a tiny blowtorch there, it was a joy to behold. I don’t want to give the impression of some sort of clinical efficiency at the cost of character, far from it. This was more like performance art! As we sat there sipping our traditional (and expertly mixed) GLC martinis, we realised we were in for a treat but what to order? Admittedly we had spotted a dish of black cod (with miso, fennel and a celery salad) that we were very keen to try but apart from that, we put ourselves in the hands of Kouzu’s Head Sushi Chef; Nobuyuki Yamaguchi and asked him to serve us what he thought we might like, and so began a wonderful journey through some of the best seafood I have ever eaten.

The Yellowtail sushi was a game changer

A long platter of finely sliced, lime-cured sea bream, dressed with salsa, micro-herbs and pink peppercorns was a beautiful introduction but it was the second dish of Yellowtail tuna with shiso, myoga, ginger, spring onion and a ponzu truffle dressing that was one of the standout experiences of the evening. I’m not going to pretend that I know what all of those ingredients are but what I know now is that if they are assembled with the skill and care demonstrated by Chef Yamaguchi and his team then the result is something truly special. One of those dishes that I for one, will remember fondly for a very, very long time! While we quizzed our host about anything and everything he was doing 3 feet in front of us, not only did he not get irritated with us carrying on like annoying toddlers “what’s that thing there?” “What are you doing now?” “How sharp are your knives?” “What type of fish is that?” but he indulged our curiosity with patience and good humour. When my friend expressed a penchant for turbot, he smiled and after a very brief transition into some sort of cartoon Tasmanian devil, hands blurred by speed and the odd flash of a blade, he presented us each with a lone, beautiful piece of silky turbot atop perfectly seasoned rice, crowned with a tiny garnish of herbs, chilli sauce and sesame seeds (I think). Even with a sliver or two of quite powerful pickled ginger and that tiny hit of chilli, it was still the flavour of the fish that shone through. Wonderful. There were other wonderful dishes to follow; a trio of tuna ‘rolls’ (I’m sure there’s a proper word for them?) which were finely chopped ‘julienned’ tuna, seasoned and encased in rice and sesame seeds which he barely ‘toasted’ with a swish of a blowtorch, but just enough to offer the lightest of crunches before giving way to the meltingly tender fish within. There was further, different, tuna sushi, although it was the fish this time that was kissed with the blowtorch, barely seared on top and still raw underneath but the contrast was delightful and the flavour exceptional. There was a roast, jointed, corn fed, baby chicken served with a chilli sauce that was crispy coated but soft and yielding on the inside and the aforementioned black cod came as a generous slab of honeyed joy that flaked apart under the weight of a fork. Our desserts were very pretty and tasted divine but to be honest, if I went again and still wanted more food, I would go back again and again to the sushi & sashimi as they were the flavours I wanted to go away with rather than chocolate ganache or buttery shortbread (however good they were). Chef Yamaguchiis is a sushi master

There was a chap dining alone with a book, just down the bar from us and he seemed to wade through plate after plate of these small, beautiful mouthfuls. I reckon he must be a regular because if I come here again (and I will) I will be doing just that!

It may be a traditional Japanese trait (if that’s not a sweeping generalisation) but I think it says a lot about the modesty and dignity of Chef Yamaguchi and his team that they seemed genuinely quite bashful as we poured forth praise with each incredible mouthful that was presented to us. If I could conjure up food so magical, as delicately, precisely and beautifully as they do, I’d be shouting it from the rooftops! Kouzu in Belgravia is a wonderful place and I’m sure there’s as much pleasure to be had there for the hardcore sushi afficianado as there was for this novice. An exceptional dining experience!