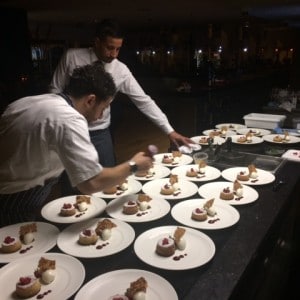 Menabrea at L’Anima for an Evening of Italian Dining Following the success of Menabrea’s exhibit at London’s Taste Festival, the Gentlemen’s Luncheon Club’s new favourite beer partnered with Antonio Favuzzi at L’Anima for an evening of Italian dining. Superb hosting from Menabrea and L’Anima

Occasionally, tasting evenings like these can feel contrived, but not tonight. The superb beer, along with our entertaining hosts Antonio (‘Lello’ to his friends) and Scott (the MD of L’Anima), contributed to an atmosphere that was friendly, relaxed and highly enthusiastic for the 5-course tasting menu ahead.

And our enthusiasm wasn’t misplaced. With a glass of Menabrea in-hand, Antonio started the evening with a series of mouth-watering beer pairings including pork-belly canapés.

Next a succulent Menabrea drunken oyster amuse bouche. Granted, it’s a combination that raised an eyebrow, but tasted so good that I could easily have eaten half-a-dozen. A plentiful helping of hand-picked crab antipasti followed, with sea urchins and sweet red onion to add depth to an otherwise delicate flavour. The next dish was my favourite – home-made Saffron Malloreddus with Seafood and Bottarga. The aroma was unrivalled. So much so I was initially reluctant to eat it, but curiosity got the better of me… Speaking to Lello afterwards, it turns out this is his signature dish, and it is clear to see why. After such a culinary delight, the Welsh lamb had a lot to live up to. Luckily, the crossover of flavours from seafood to meat delivered. The lamb was tender and the complementary red wine was delicious. Feeling satisfied already with such a plentiful and authentic meal, the raspberry and almond tart rounded things off perfectly. The tart had a subtle liquorice crumble underneath that gave a tasty unexpected twist – a perky ending to the meal.

Over the past few weeks Menabrea have set their stall out in the UK. The Taste Festival was a great introduction to a fantastic beer and the evening at L’Anima further consolidated the GLC’s support. The affable Lello and his splendid Italian cooking, along with the lovely, welcoming ambiance of L’Anima, combine to make a dining experience that the GLC would wholeheartedly recommend.