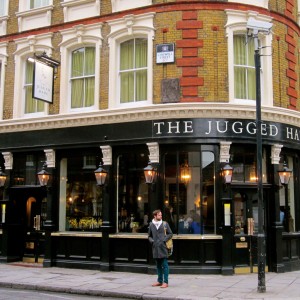 From moment I tasted jugged hare at Rules many years ago, I’ve been on a mission to find this elusive dish ever since. Whilst being difficult to find, this 18th century recipe is simple to make, just add a marinated hare to a pot with vegetables and gravy (made from the hares blood) then slow cook over a low heat for a long time. The resulting dish maintains the hare’s distinctive gamey flavours in a wonderfully rich stew.

Don’t get caught out by hare season
As suggested by the name, the Jugged Hare in Barbican was a natural choice to explore my next dish of jugged hare; however on my first visit I learned hare season ran from 1st August to 28th February and I’d missed my opportunity. So, after some careful planning I was determined my second visit to the Jugged Hare would be a success, and it was. The Jugged Hare’s traditional, well-kept façade leads into a pub (with great beers) and adjoining, game-focused dining room complete with red upholstered booths and stools at the kitchen. It’s a busy place and the atmosphere reflects this with a melee of noise from customers vying for attention from the visibly stretched waiting staff. Squirrel, smoked eel and teal
Following the success of our visit to Arbutus, I opted for the smoked eel and black pudding terrine which was both delicate and flavorsome, with just enough smoke in the eel. The teal was a bloody starter being a little too rare for our tastes and putting mild-guilt aside we all tried the squirrel, which thankfully for me I didn’t like. Duck, pheasant, mallard and widgeon
One of the mains needs no introduction, and whilst the jugged hare contained a little too much cinnamon for my liking, it was flavorsome, plenty some and rich. So much so, it made the other orders of pheasant, mallard and widgeon taste a little dry in comparison. The birds were all served on wooden blocks that added to experience but did little for the practicalities of eating. What’s the verdict?
The Jugged Hare is a difficult one to summarize. On one hand it’s a fantastic gastropub, with great beers, a lovely environment and wonderfully meaty menu on offer.

On the other hand you can’t help be led into the pretense that the Jugged Hare is a destination restaurant, and this is where the problems start. The service we experienced was poor and whilst the menu looks fantastic the quality is inconsistent which doesn’t encourage you to come back. This is especially so when similarly priced dishes can be found all around London in Rules, Corrigans and Arbutus to name a few.