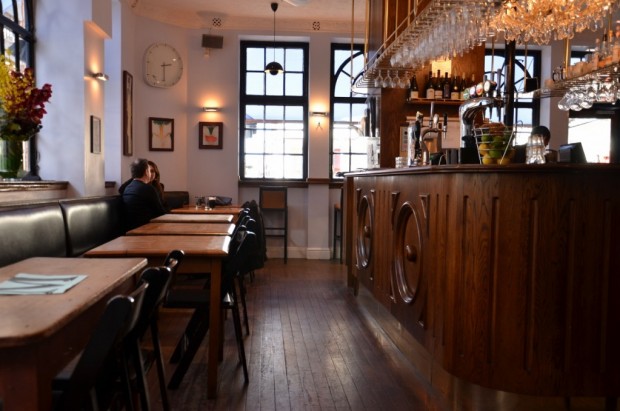 The Portman sits on the rarefied borders of Marylebone and Mayfair, in a neighbourhood that its website describes as “chic” and “exclusive”. I was slightly worried, therefore, that it would be bursting with a mix of sinister Russian oligarchs and guffawing toffs in red trousers. Thankfully, it is an unassuming British pub, with a crowd to match. Tucked away upstairs is the more elegant restaurant, which offers a nice balance of steady favourites and ambitious gastronomy.

The Portman’s crustacea menu was a delight

We started off with a pair of beautifully mixed Negronis, to see us through the ordering process. I was delighted to see a crustacea menu, appended to the starter menu, and opted for the West Country Ceviche of King Scallops, as well as some Dorset Crab on Toast, dressed with broad beans, pea shoots and lemons. The scallops were glorious – smooth and clean, meaty but delicate, in a perfectly balanced ceviche marinade, which hinted at soy and mirin, as well as the expected citrus notes. The crab was a little underwhelming in comparison, but I wouldn’t have fancied the chances of many dishes up against such sublime scallops. A little confusingly, we were asked if we wanted more cocktails when our starters came out but we instead ordered a carafe of crisp, mineral, lemony Picpoul. We had just come back from a holiday in Languedoc, where Picpoul is the tipple of choice with shellfish, and this was right up there with anything we tried in the region. The Portman’s (mainly Old World) wine list is a treasure trove, helpfully arranged by characteristics of the wine, so the whites feature “Crisp and Minerally” and a “Perfumed, Rounded and Elegant” sections, while the reds include “Silky and Rounded” and “Hints of Spice”. I decided to take a rustic diversion for my main course, opting for the Braised Rabbit Ragout Pappardelle, with Tomato & Parmesan, and a pint of ale. This was a rich, meaty and delicious course – slick ribbons of finely executed pappardelle coated with a robust, flavour-packed ragout which pulled no punches put managed to avoid any unpleasant gaminess. My partner opted for the Fillet of Organic Scottish Salmon, Wilted Lettuce, Cucumber & Dill Salad with Tomato Dressing. While this was promising on the page, the salmon was overcooked and dry. To be fair, we tend to barely cook our salmon at home, so it is rare as hen’s teeth and just a grade above sushi in the middle and that is how we’ve come to expect salmon to be, so this was disappointing but may be to some peoples’ taste. To end the evening, we shared a triumphant sticky toffee pudding, on the recommendation of our waitress. It packed that crucial hit of dates that marks out a good sticky toffee pudding and was decadently moist, with a lovely toffee sauce and vanilla ice cream to top it off.

Overall, The Portman manages to deliver on most fronts but occasionally makes the odd schoolboy error. I mentioned a couple above but perhaps the worst of these was that, while we were enjoying our starters, Whitney Houston’s “I Will Always Love You” was blasting out from the sound system. This is a restaurant, not the last dance at a 1987 school disco. I’m assuming the music was just piped up from downstairs, where the conversation was probably loud enough to drown out Whitney’s histrionics, but upstairs it was just us and one other table, so there really was no escaping it.

The Portman is a go-to neighbourhood restaurant

If I lived or worked in Marylebone, I would happily frequent The Portman as my go-to neighbourhood restaurant. There are some exquisite dishes and the wine list begs further exploration. It is elegant, unpretentious and very reasonably priced – we spent under £100 for three courses (sharing a pudding) plus cocktails, wine and beer – so it can be forgiven the odd slip.