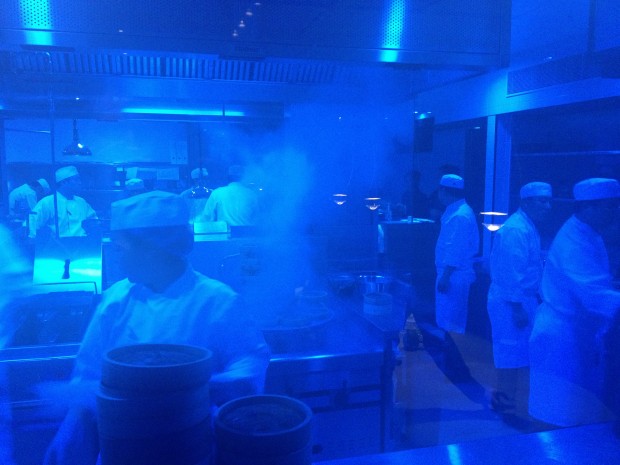 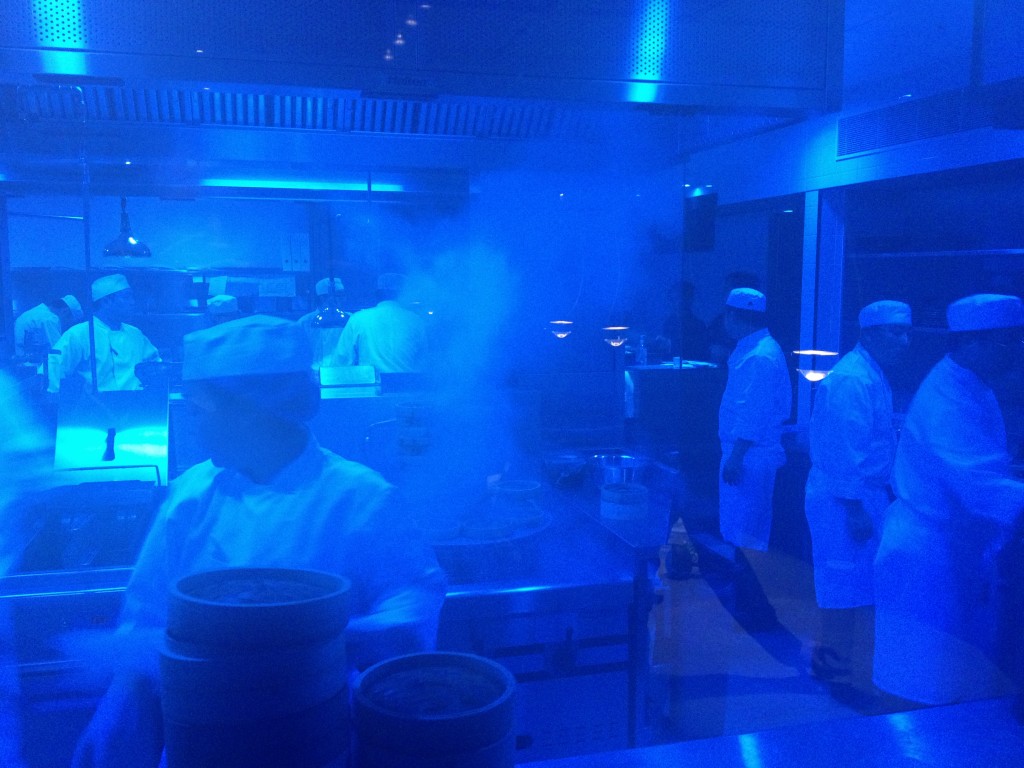 Over the years Hakkasan has established itself as a destination restaurant for Chinese dining, and now they’ve taken their reputation a step further to introduce Chinese fine dining at the newly opened HKK to, “create an unparalleled, bespoke dining experience”. 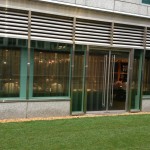 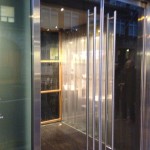 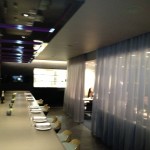 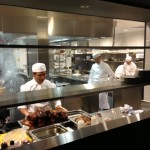 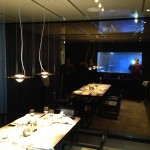 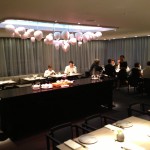 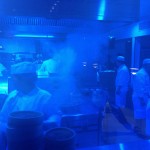 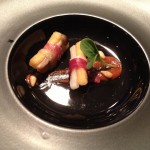 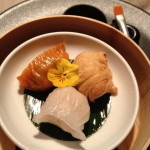 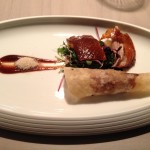 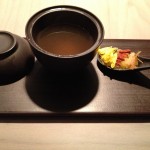 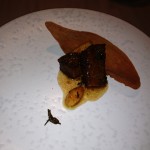 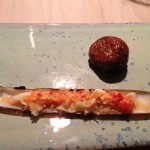 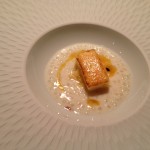 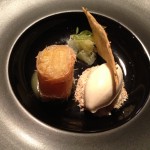 With HKK being one of the hottest tickets in town, the restaurant was fully booked over Christmas, with the exception of the private dining room, so we decided to book the room and sample HKK’s full experience.

Whether it’s intentional or not, the outside of the restaurant, along with the doorway is low-key and tricky to find, perhaps they only want people ‘in the know’ to visit.

As with all Hakkasan restaurants, the meet-and-greet is a perfect blend of friendliness and helpfulness. On first impressions HKK looks similar to a regular Hakkasan restaurant. The décor is slate grey and minimalist, flowers are strategically placed throughout the restaurant, although one noticeable difference is; this is not a subterranean restaurant unlike the other two Hakkasan’s in London.

We were led to the private dining room past the main restaurant, which felt like an oriental Murano, with nicely arranged tables and a homely feel, finished with a central lighting feature and transparent drapes. HKK’s private dining room is very special with each of the four walls offering something different from drapes, mirrors, a fresco and best of all a private ‘blued out’ window into kitchen, which was literally full of a variety of cooks and chefs.

On booking the table we’d already ordered the 8 course menu (a 15 course meal and an a la carte is menu is also available). The first dish served was the ‘four treasure Iberico ham wrap’ which consisted of two wraps and a tasty puree. The pieces were quite small so were eaten in one mouthful, and tasted light and complex at the same time. 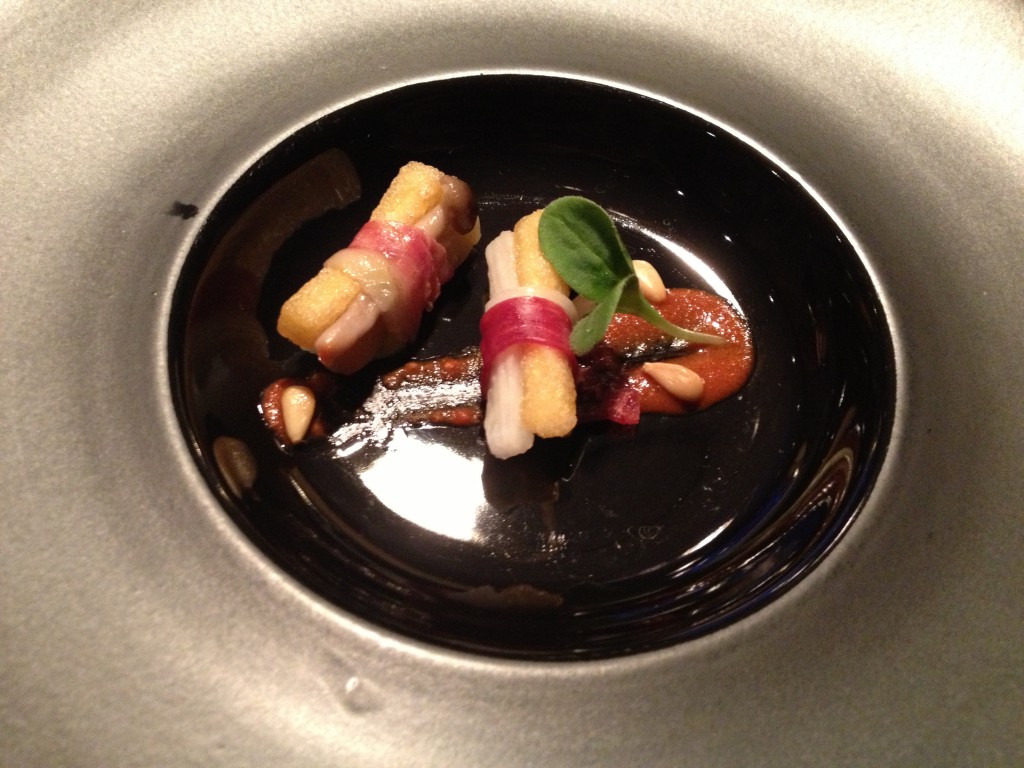 This dish was followed by the ‘dim sum trilogy’ which we were told was prepared by a specialist dim sum chef, and we were subsequently instructed to eat the dish in a particular order. As I’m not the biggest fan of dim sum, I was not expecting much from this dish, however it could have been one of my favourites. The texture and flavours were spectacular and the hint of chilli in the third piece was a nice surprise. 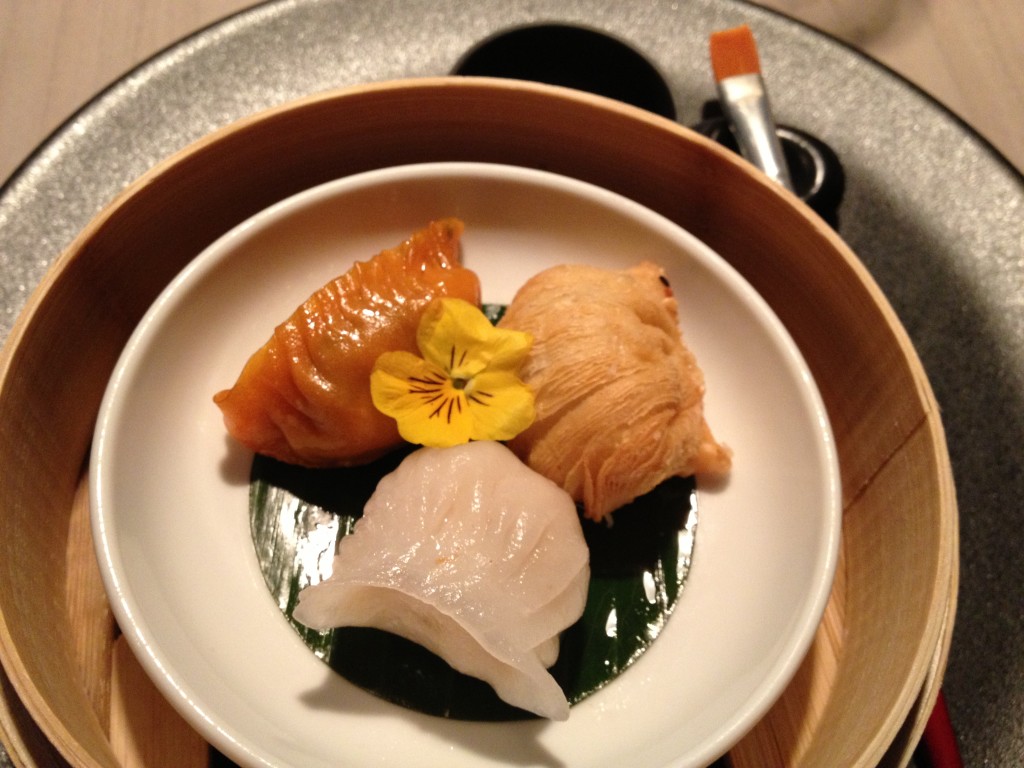 A real treat was to see the ‘cherry wood roasted Peking duck’ cook through our private cooking window.  When it arrived, it was carved from the table, however unfortunately for us, that table was round the corner from ours! So we waited a little while for the third dish and missed out on the visual experience. Once prepared, the dish arrived with instructions to dip the skin into the sugar resting on the sauce before eating the duck and wrap – something that was divine. 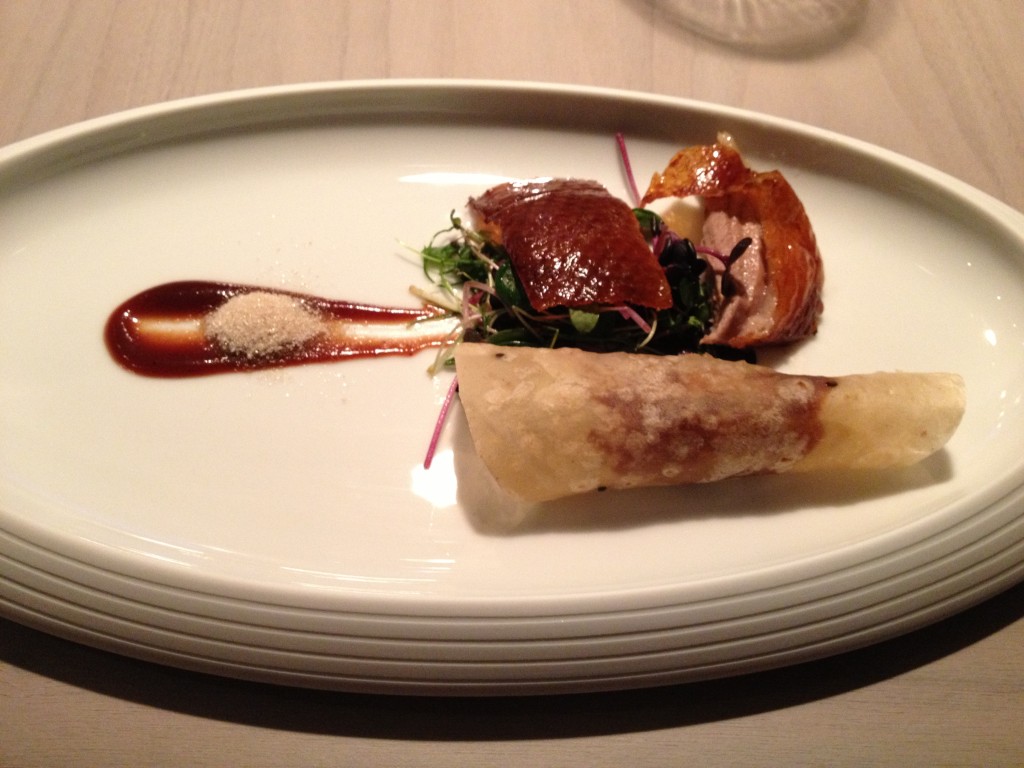 For the ‘poulet de Bresse and dried scallop soup’ our instructions were to mix the dried scallop and perfectly arranged accompaniments into the soup for a few minutes before eating. Again another wonderfully complex, light and tasty dish. 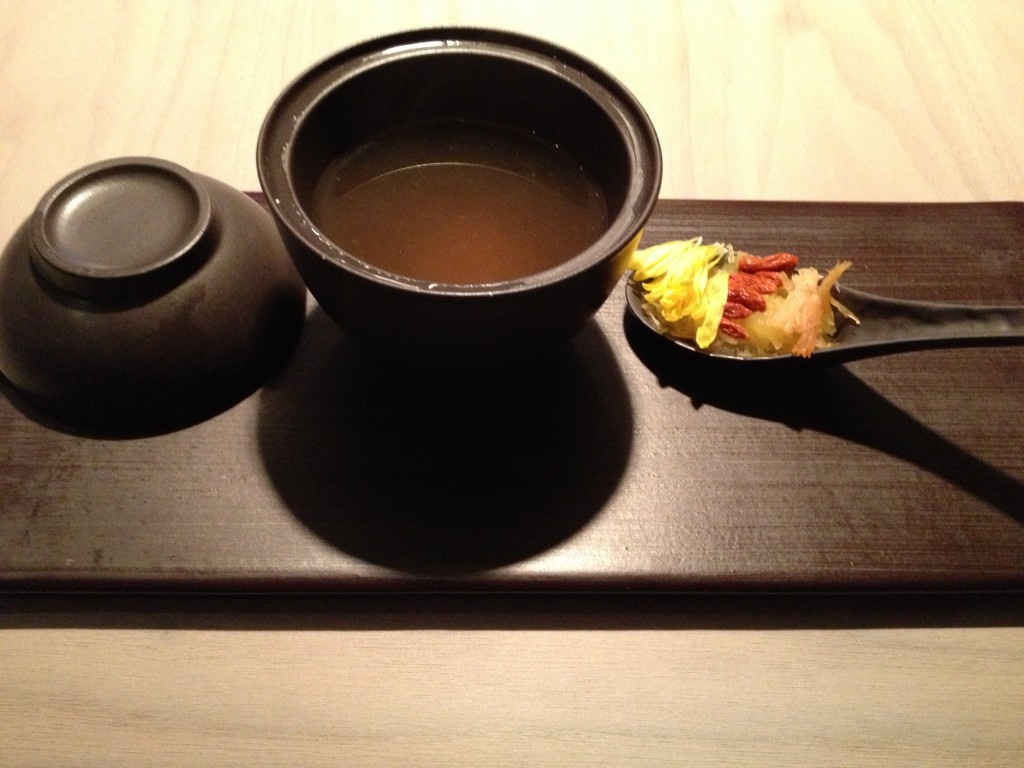 The next dish was the ‘jasmine tea smoked Wagyu beef’ which was unbelievably tender and melted in the mouth. Steamed razor clam with chilli, mui-choi glutinous rice followed, which was the only disappointing dish. 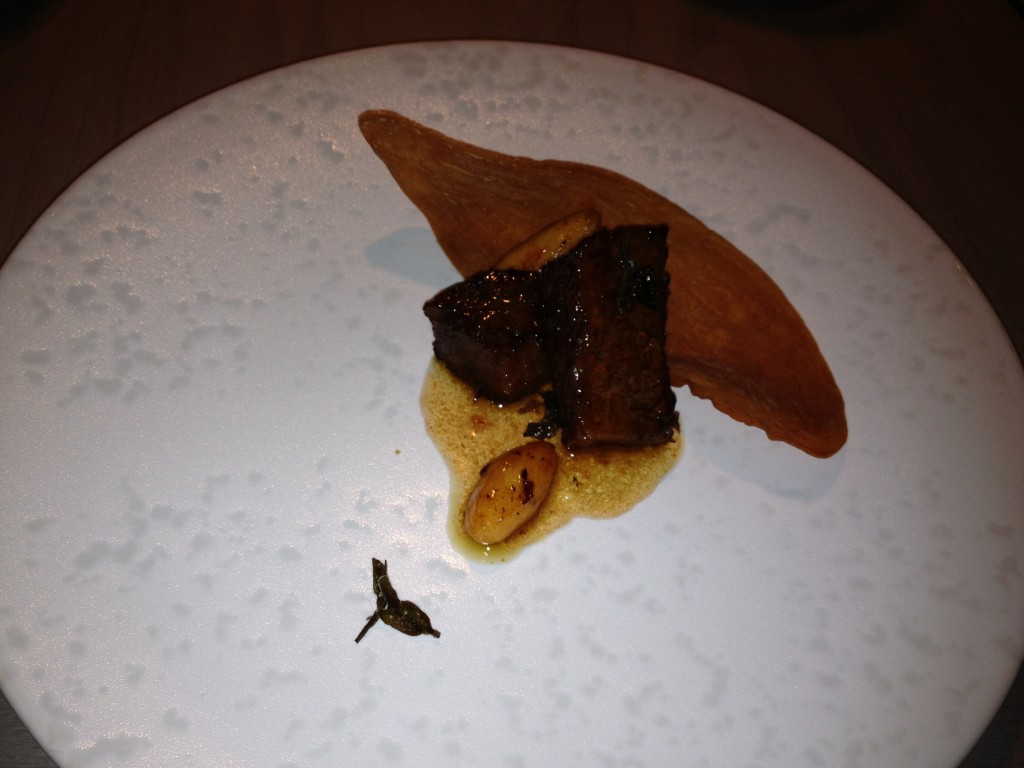 The razor clam’s flavour was below the par of the previous dishes and although the glutinous rice was tasty, this stodgy accompaniment was out of place in this otherwise sophisticated and delicate meal. 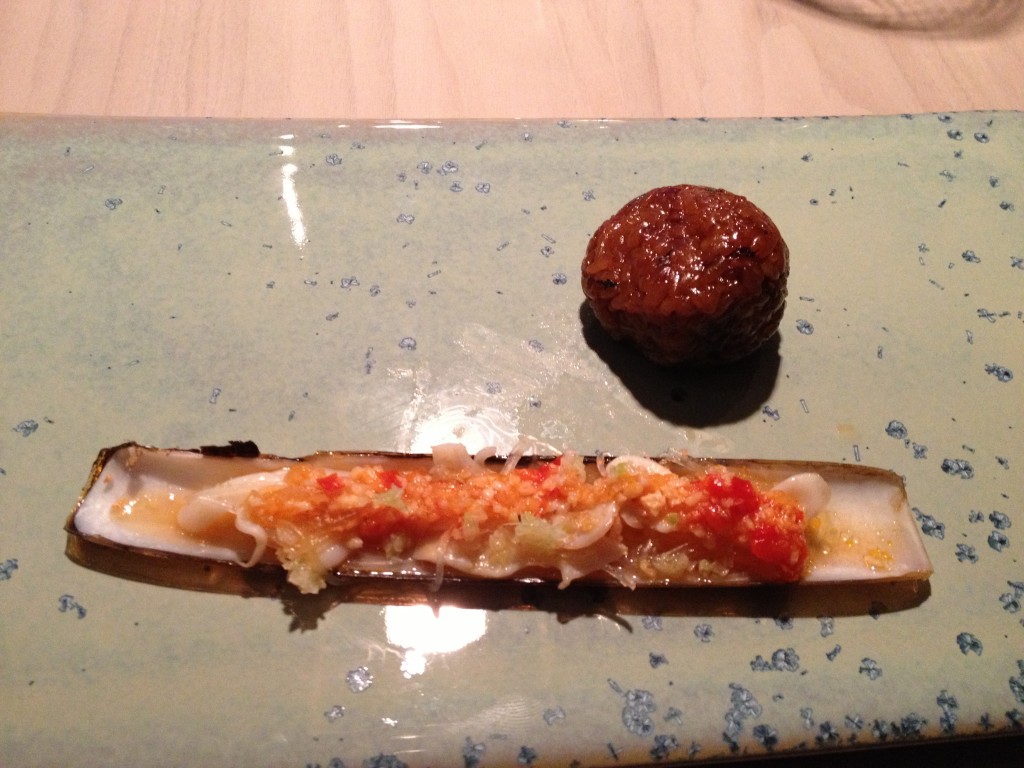 The ‘lychee tapioca, passion chiboust and passion jam’ was served in an impressive textured white bowl with no instructions and was a taste sensation, perhaps my second favourite dish (and I don’t have a sweet tooth). 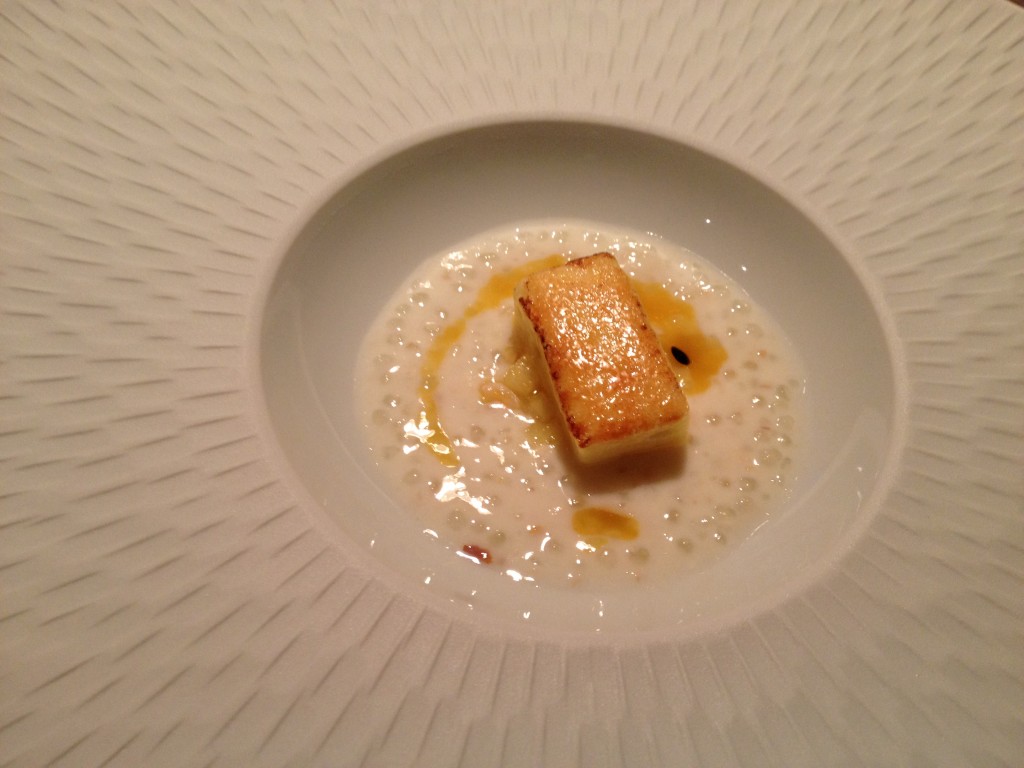 The final dish of the day was the ‘pineapple fritter, salted lime jelly and vanilla ice cream’ which we were a bit unsure of until we tasted it and – like all the other dishes – it was exceptional and the zest of the lime jelly cleansed the pallet nicely to round off the meal. 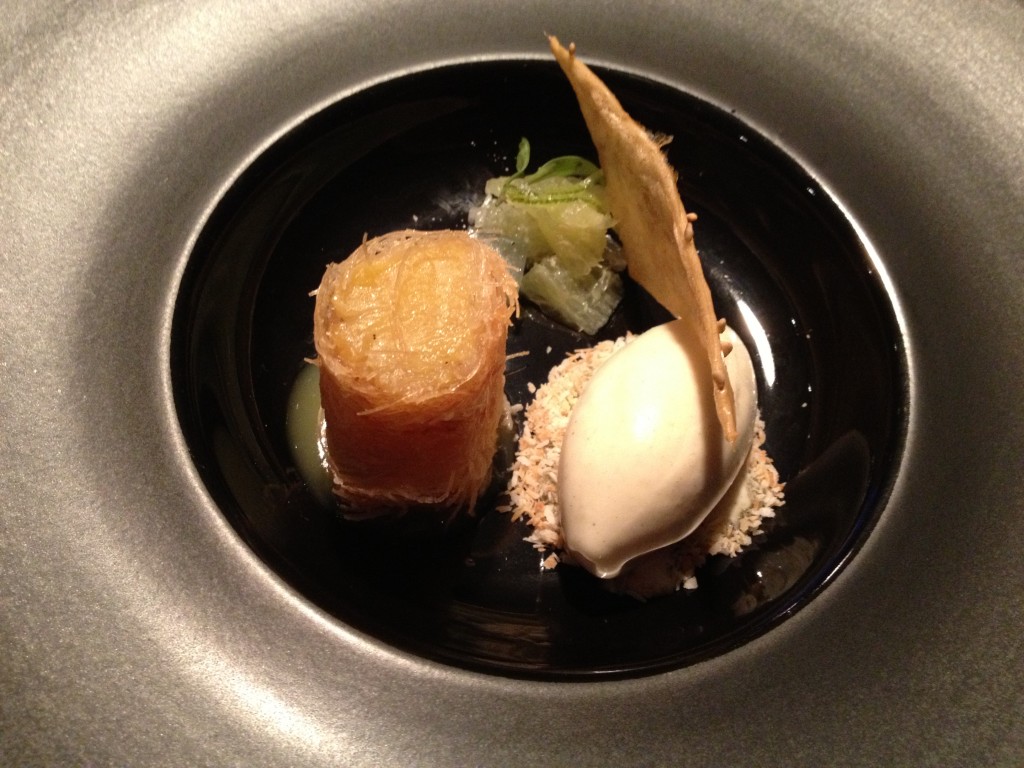 Is Hakkasan’s HKK worthy of a Michelin star?

It’s abundantly clear Hakkasan’s HKK is looking for a Michelin star, the service is exceptional and the food is exceptionally intricate and flavoursome. The dining experience is wonderful; you really are ushered through the whole meal and made to feel quite special. The only two points to bear in mind are; on our meal the waiter explained the dishes perfectly, however we were only given the menu at the end of the meal which in my mind detracts from the experience. It would be nice to read what you’ve just been told and talk through the dishes on offer. The other point to note is; whilst the dishes are without doubt some of the finest you’ll ever taste, there are not a lot of them and I’d certainly recommend the 15 course menu over the 8, unless you want to do what we did and go to the Boisdale to fill up on the cheese board.