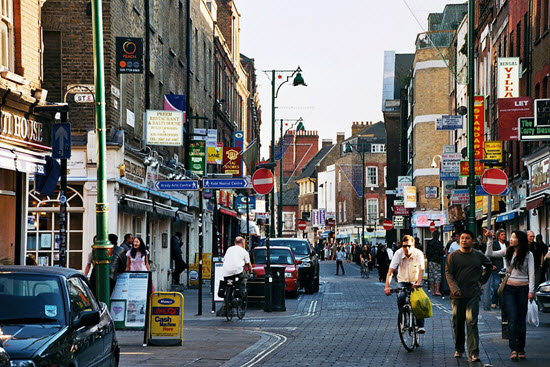 The East End of London is typically associated with cockneys, the docklands, and pearly kings and queens. Once seen as an impoverished part of London, East London has done much to rejuvenate itself over the years, with the turning point being the 2012 Olympic Games, held in Stratford. Now a haven for hipsters, the East End is now more synonymous with fashionable gentrification and cultural diversity. Thea areas to explore are:

This once rundown part of London is now awash with fashionable galleries, trendy café-bars and restaurants. Expect the unexpected.

Spitalfields is a network of 18th-century streets centred on Spitalfields Market sells antiques and crafts inbetween a good choice of food stalls. Next to the market is Brick Lane, home to London’s Bangladeshi community and famous for its curry restaurants.

Canary Warf and the Docklands

London’s obsolete docks were transformed in the 1990s with an abundance of skyscrapers such as the Canary Wharf. Awash with city-boys and tourists, glass fronted wine bars and restaurants are plentiful.

Areas to eat in East London

Our favourite restaurants in East London

The GLC regularly frequents London’s famous Brick Lane for a curry. But for one of the nicest Argentinian steaks in London visit Buen Ayre. The Beard to tail offers unusual cuts and the English restaurant offers a little slice of 18th century England.