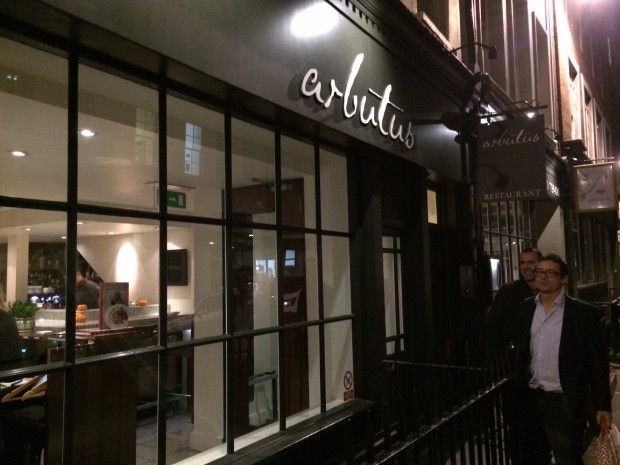 After the traditional ‘warm-up’ of a couple of beers, this time in deepest Soho, our four intrepid gastronauts made their way to Frith Street and Anthony Demetre and Will Smith’s restaurant; Arbutus. There was a frisson of excitement among us as we made our way through the throng of meejah types and Soho socialites as, for the first time in a while, we were heading for a Michelin starred meal and the promise of some ‘fayne-daning’.

We were greeted very warmly and immediately shown to our table in the small but perfectly formed dining area. The décor is a little bit ‘trendy gallery meets modern apartment’; all bare brick or white walls, subtle lighting and contemporary art, but a very pleasant environment in which to partake of the GLC’s obligatory martinis (two dirty, one clean and one downright filthy!) and peruse the menu. The pick of the starters was probably the ‘warm, crisp pigs head’ which packed some big flavour into a small, soft, delicately fried slab of deliciously slow cooked pig bits. The richness of the pork was balanced quite nicely by some slivers of pickled radish and a dollop of pomme purée. A scattering of crushed pistachio nuts gave the dish some necessary texture. Others opted for the ‘smoked eel served with Asian flavours’ and were not disappointed. Elsewhere there were beautifully cooked scallops, crispy on the outside and silky through the middle. The quality of the starters certainly kept the bar high for our anticipation of the main course. Arbutus has a relatively small but quite diverse menu (five starters and six mains when we went), which allows them to offer something for everyone while obviously concentrating on aiming for perfection throughout. I opted for roast guinea fowl which was perfectly roasted breast, accompanied by a small guinea fowl ‘burger’ for a lovely bit of variety, again the richness of the bird was offset by pickled veg (this time delicate slices of cauliflower) and some lovely, creamy puy lentils that had been cooked almost like a risotto. My fellow ‘gentlemen’ chose, in no particular order, the saddle of rabbit which was again beautifully cooked (if a little small) and accompanied by some puréed curried sweet potato, baby leeks and a pearl barley ‘risotto’. Conversely, the gentleman who ordered the halibut would still have been eating it now if we hadn’t helped him out, such was the size of the slab of fork-tender fish that lay covered in brown shrimp, tenderstem broccoli and squash bavarois (a Bavarian style cream). For me, however, the stand out main course was ‘Pieds et Paquets’ which translates roughly as Lamb’s tripe and trotters (they use a bit of shoulder too). This was a huge bowl of huge flavour, albeit one heavily accented by the acquired taste of tripe. I’m normally no fan of tripe but this dish genuinely managed to incorporate the robust flavour as just one constituent part of a well-rounded, meaty bowl of lamby loveliness! As three of our number sat back and sighed contentedly while we decided which sweet treat to round things off with (a deeply caramelized Tarte Tatin for two and a fine, crumbly frangipane for me) the gentleman who still had plenty of room left (after the modest portion of rabbit) went a little bit ‘off-piste’ and politely enquired as to whether he might be able to have the afore-mentioned ‘Warm, Crisp Pigs Head’ instead. For dessert! The delightful young lady who served us impeccably all evening didn’t even bat an eyelid – “Of course Sir”. A great meal and a great time had by all

Just a quick note on the wine list at Arbutus (often a bone of contention for The GLC where some are keen to avail themselves of the finer stuff at the bottom of the page whereas others, your intrepid reviewer included, prefer to keep the funds in check for food): Here they manage to cater to all of us by offering nearly everything on the list in a small (250ml) carafe, as well as by the bottle of course, so those who so desire get to sample some of the good stuff without breaking the bank.

Overall I felt that we’d had some really excellent, thoughtfully and expertly prepared food with real attention to detail, especially the flavour combinations. I also felt like we’d had real value for money. It’s not often we come away from a restaurant (let alone a Michelin starred one) with enough kitty left over for a digestif or two in a local pub before going our separate ways, contented, sated and happy once again to have enjoyed a great meal with great friends in a great restaurant.