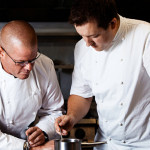 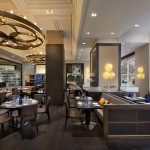 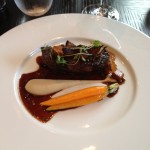 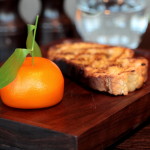 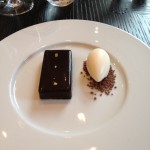 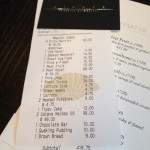 If you have come to this review via the ‘About’ section of the Gentleman’s Luncheon Club, you will have noticed that the last couple of GLC’s have seen the stakes risen in terms of Michelin stars. So when it came to that part of the evening at Murano by Angela Hartnett, when our waitress randomly picked out my name from the glass containing scrawled names of the GLC members, my first thought was ‘where do we go from here’?  One thing was certain – I was not about to drop the Michelin baton – the stars were not going out on my watch.

I’d had Dinner by Heston Blumenthal in the back of my mind for some time and it’s one of those choices that you hope fellow GLC’ers don’t get to before you.  The price point was within our GLC budget (just), but more importantly, it was the right time to raise the stakes even higher.

As is the case with ever-expanding GLC traditions, upon the selection and booking of Dinner, a cryptic clue to the destination must be sent. So with a day to go to GLC 13, a smile broadly sat across my face; I pressed the send button with the following sentence “This oriental canard has its supper steeped in history” then watched with delight as Nobu and such restaurants were touted but gleefully rejected.

Dinner by Heston Blumenthal is located in the Mandarin Oriental Hyde Park Hotel in Knightsbridge. It’s a rather impressive if slightly disappointing location (I’ll come onto this later) for Heston to base his take on historic British gastronomy, but like any Michelin star restaurant, what struck me first off was the impeccable service. There’s always an element of trepidation when presenting your GLC choice to the group, but the excellent and attentive welcome we received to the grand hall immediately turned my fear into a rather smug sense of wellbeing. Seeing my fellow diners smiling as much as me, I couldn’t help but think I’d come up with a real GLC winner.

Basking in the glow that fine service can give, we were taken through the main area of the restaurant where an impressive glass wine cellar creates a stunning boundary to the restaurant, matched equally by the open window into the vibrant kitchen. We were seated quickly at a table with views of the beautiful Hyde Park and four dirty martinis arrived promptly. The sheer seamlessness made it hard not to be impressed with Heston’s latest venture. One point to note is if, like me, you like your martinis very dirty then £60 for four drinks is well worth it. However, if you are not a big fan, I would certainly recommend them with a twist, as at £15 a pop you want to enjoy your drink!

For me, when dining at a good restaurant, one of the key contributors is the personality and knowledge of the waiter; something that for Heston’s restaurant is even more important. Ideally you also want them the know the back story to the restaurant itself and for each dish, about the creation of the idea. Our waiter was excellent and before ordering our starters, he gave us an in-depth opinion on what starters would work for us and where they had come from. Certainly for me, sitting there sipping my martini, listening to how ketchup was invented by the British in cucumber form, it was five minutes of pure enjoyment.

I plumped for the Roast Scallops for starters. Living by the seaside as I do, eating scallops in a good restaurant is a luxury that simply keeps on giving and I was intrigued to see Heston’s take on this dish. It didn’t disappoint, the scallops were succulent and the cucumber ketchup beautiful and intriguing. Weighing in at £16.50 I thought the price wasn’t too bad given the complexity of flavours and delicate nature.

The other starters were somewhat bolder, including smoked mackerel, the aptly named rice and flesh, a sort of ill-looking saffron based meat risotto dating back to the 14th Century and of course the 13th Century meat fruit, one of Heston’s signature dishes. As a starter it looks awesome and the whole fruit is edible including the stalk. We all agreed that it is incredible to see just how skilful Heston is at coming up with the types of recipes that are there to simply designed to play with your mind. So far, Dinner by Heston Blumenthal had performed strongly and all four starters had to be given 10 out of 10.

With a tough act to follow, the four of us perused the wine list, and it was here that we came across our first issue with Dinner… It isn’t of course the quality of the wine, our choice was superb, but what was strange was the sudden jump in pricing. There were two or three bottles around the £40–60 range, but beyond this, the wine jumps to £130 and well beyond. As a dining club we tend to buy at least one bottle in the £60-80 range, but this simply wasn’t on offer here. Certainly the Catena Malbec we chose (under £60) is no slouch and given Malbec is a personal favourite, I was happy; however to get real choice at Dinner one has to dig deep into the wallet which is actually out of step with the price of the food. One for Heston to ponder…!

Our main courses, however, dismissed any gripes we had on the wine choices. Given that we all seemed to endlessly eat each other’s food, it says something that we were all inspired enough to give up part of our dinner, to try Heston’s other creations.  We chose the pork chop as well as the roast turbot, which was simply perfect fish cooking. Meaty cockles graced the plate helping to balance the flavours nicely.

However the most intriguing main was the Beef Royal, an outstanding dish from the 1700’s cooked slowly for fifty hours. It simply shone with a wonderful charcoal essence fuelled by a rich ox tongue jus.  According to our waiter it had been served for royalty at the time and certainly if it was good enough for George I, it was good enough for the GLC.

Finally, to dessert and my only food criticism. Dickie Dolan had pre-ordered the Tipsey cake at the start of proceedings. It was well worth the wait, a fantastic dish, as was the brown bread ice cream, with salted caramel and lemon. I however had ordered the chocolate bar, which was for me a bridge too far. There was too much bitter chocolate, and when combined with the overly sweet passion fruit jam, it tasted like a Tangfastic. Having enjoyed such subtle flavours during the rest of my dining experience (the scallops and the stunning slow cooked beef), this was an unwelcome taste-overload to end the evening.

In my opinion, Dinner by Heston Blumenthal is a simply brilliant restaurant. It’s not the Fat Duck and it is never going to be, but with drinks included our bill of £471.09 including service, this was nowhere near Fat Duck prices. While it’s not going to get into the top 20 world restaurants, you get the impression that this isn’t Heston’s wish. What he delivers is an impeccable, beautiful, stylish restaurant which presents lavish yet fun food with a theme. It’s a perfect venue for a food club, giving ample subject matter to discuss.

The four of us left the Mandarin Oriental with a satisfied smile and were still smiling as we left the pub after our post dinner dissection.  We all agreed it was a fabulous dining experience and a nice location. However, some of you may remember I mentioned the location earlier and promised to come back to it…

My view is that the choice of the Mandarin Oriental hotel is too safe a venue and Heston does not need to play it safe. Given that his food is about taking risks and presenting food in beautiful and unusual ways, I feel that the experience could be enhanced further by using a venue which echoes these values. Somewhere that is as fantastical as the food.  Another for Heston to ponder…!

In this cookbook Heston Blumenthal moves away from his scientific kitchen to explains the most effective cooking techniques and why they work. Heston’s instructions are precise and easy to follow, with lots of helpful tips, and each chapter is introduced with an explanation of Heston’s approach.

View this cookbook on Amazon >>