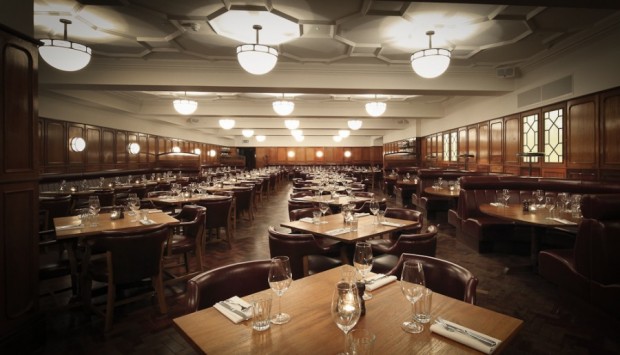 Breakfast at the Hawksmoor Guildhall

The Hawksmoor has been responsible for two foodie-defining moments in my culinary life. Firstly the Hawksmoor introduced me to the differences between corn-fed and grass-fed beef (subsequently making me realise the Gaucho served the equivalent to battery farmed beef and was a disgusting waste of money). Secondly they introduced me to chateaubriand, which to this day has not been rivalled despite numerous attempts to try. So you can imagine my delight when a fellow-foodie (Andy) waxed lyrical about the Hawksmoor’s breakfast.  Naturally I poured all my efforts into carving out a ‘very important’ business meeting that could only be conducted at the Hawksmoor Guildhall.

The Hawksmoor Guildhall is familiar hunting ground for the GLC and we’ve had many happy meals there. It’s also a lovely venue. I like the fact you walk downstairs into the restaurant and it feels a bit like an old school hall. Booths furnish one side of the large rectangular dining area that’s littered with tables for four-or more. Our ‘power breakfast’ began well by being seated at a booth (always a strong start) and following a cursory glance at the menu, we promptly ordered and were served 4x Full English Breakfasts. The winners and losers from the Hawksmoor breakfast are . . .

The plate arrived full to the brim with accompanying ‘trotter baked beans’ in a separate bowl. First impressions were strong, and the sausages made with pork beef and mutton stole the show by some distance. The eggs were perfectly cooked and the black pudding was extremely light and rich in flavour. However, I thought the smoked bacon tasted odd (a little like having penicillin breath) and the beans tasted of curry and were cold, making the overall dish rather disappointing – especially the bacon. Our breakfasting experience wasn’t helped by the diabolical service we endured. From forgotten orange juices, to late and cold coffee, the morning’s trajectory was consistently downhill from minute-one. The experience also jarred with our experiences of the Hawksmoor at night.

Perhaps our expectations were too high? Perhaps we visited on a bad day? I certainly can’t reconcile the breakfast with the evening dining. However, I would be willing to go back to give breakfast another try, even if it’s just for the sausage, black pudding and egg combo.