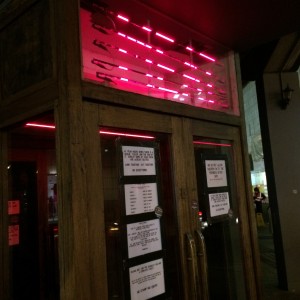 Meatliquor has circled the top of my ‘must visit’ list for some time now and thankfully my opportunity came last week. So, after a cheeky (and disturbingly priced) Meantime Pale ale in my new favourite pub, Mayfair’s Running Horse off I set.

A short walk took me behind the hustle-and-bustle of Oxford Street to Meatliquour which is reminiscent of a scene out of Blade Runner, with the sculpted concrete architecture punctuated with neon red “Liquour” signs indicating you’re in the right place. I also noticed a permanent metal cue-rope and more signs on the door than I cared to read so, ignoring all of that I went and wow! If you want instant atmosphere this is the place. Red lighting, loud music, wall murals, booths and tables everywhere. You could clear the room and be forgiven for thinking you were in a nightclub. Being the first to arrive I enquired about our table and was politely told there were no reservations. So I ordered a beer and following my mild look of horror, was politely told only canned beers were sold. So slightly settled and unsettled at the same time I perused the menu. There were about 10 burgers to choose from starting from £7.50. A stand-out choice was the ‘dead hippy burger’ with ‘dead hippy’ sauce and I’m told the ‘dirty chicken burger’ is worth a try. But not knowing what a dead hippy tastes like and wanting meat, I opted for the red chiliburger, and wow again! This is a burger to contend with, it literally exploded with flavor, a perfect balance of meat and chili, it just can’t be faulted. I washed it down with a sizable portion of fires and another can of beer all presented on a piece of paper with kitchen roll for a napkin, Michelin star, this is not. What it is however is a staggering amount of fun, a wonderful experience in a red-lensed Blade Runner esque atmosphere. Oh, and as for the metal cue rope and signs I ignored. It turns out there was a sizable cue waiting to sample Meatliquor’s delights as we left so get there early. And if you bother to read the signs you’ll know that if you’re split from your group you’ll have to wait at the back of the cue, much to one girls disgust. It was a shame that such a draconian rule should slightly sour an otherwise lovely night out.