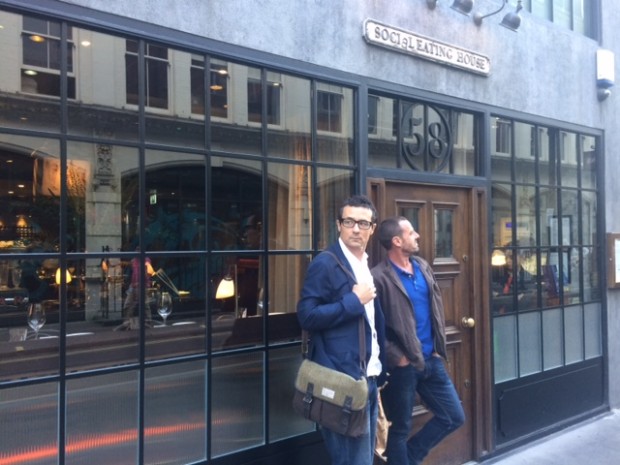 There are times when choosing a suitable venue for our London restaurant blog owes as much to the location, time of year and atmosphere, as it does the food, service and ambience of the restaurant. With this in mind, and a nod to memories of fun times past, location and season certainly weighed heavily on my mind as the waiter randomly picked my name out of the glass to honour the GLC with the next choice for our summertime venue.

With summer firmly in my thoughts I wanted to transport the GLC back to central Soho; a place synonymous with post work nights out for Londoners. An area with so much choice and bags of atmosphere, which in the summer sunshine is a fine example of why London is such a great city. As such I asked the GLC to meet up at the Sun and 13 Cantons for pre-dinner drinks before heading off to the Social Eating house just around the corner on Poland Street. With a couple pints of Frontier successfully negotiated we left the pub and headed first for one of the Social Eating House’s jewels in the crown; their cocktail bar ‘The Blind Pig’. The Blind Pig is the upstairs bar to the Social Eating House and you enter via a looming entrance next door to the restaurant made evident by a massive brass effigy on the door resembling of course, a blind pig. It could of course all be a dreadful tourist stunt but thankfully this is Jason Atherton we are talking about and the idea of the cocktail bar as a pre-dinner or destination joint was inspired. The Blind Pig has been designed as a speak-easy type affair. Indeed, with the seemingly never-ending onslaught of bourbon based cocktails lately, the “speak-easy” is becoming something of a new fad here in London. Ironic really considering that between wars for us in the UK, the access to alcohol seemed like the good times rolled beneath our feet, skipping somewhat along the one-way street. However the name Blind Pig comes from one of the many slang terms used during prohibition to mean speak easy; and touristy or not, I loved the idea that our GLC evening out in Soho could and should embrace not just an old drinking haunt for all four of us, but a cocktail bar en-route to dinner.  Although it is possible to eat in the bar, we chose only to sample their cocktail delights. It’s a dark but smart area with a fun yet cool cocktail menu deeply entrenched in wordplay, and certainly taste wise there were some highlights within our round of drinks such as the Buck Stops Here;  a Whisky Rye based cocktail served with US Dollars, or the beautifully named Dill or no Dill cocktail; a gin affair served with smoked salt and dill. Coming in at just under £10 a cocktail, certainly for London, the Blind Pig as a destination cocktail bar sits pretty competitively price wise within the cocktail arena. Inspired by the booth dining at the Jugged Hare, one of the other criteria I had for this particular GLC was to carry on this concept. The GLC certainly of late has needed room to spread out. Lots of little dishes, several glasses with differing drinks for differing courses has meant we need space. Having a booth really can make a difference. Furthermore it seems so much more luxurious to be sitting in a booth area slightly away from the thronged masses at an oversized table, amply giving us all the room we needed. It is certainly a tip from the GLC and although the Social Eating House cannot guarantee a booth, I had requested one at the time of booking, reminded them again on the day, and they duly delivered. Indeed the scene was set for another great GLC.

The Social Eating House is a clever affair with Paul Hood steering, having gained his two Michelin stars previously working in some of the best London restaurants such as Maze, the concept of “Social” is foremost at the heart of this place. There is a deliberate design about everything this restaurant attempts to do. It has a smart front, a dark and atmospheric interior, the lighting seems designed to focus in on your table and not out across the restaurant and of course the cocktail word play is no accident. Certainly when it comes to the food, the concept of social eating is plainly evident. We opted for the pre-starters that make up part of the a-la-carte menu as the Social Eating House is known for its sharing jars (designed to be eaten whilst drinking) and this concept plays into the GLC’s hands beautifully. We chose all three sharing jars between the four of us and were duly delighted when the smoked hummus, the smoked beef tartare and the heritage tomato jars arrived. Now quaffing our customary Martinis sitting in our booth, the GLC was certainly heading in the right direction. We found the service to be well placed between efficient but not too speedy. I will admit that the service was not in the same league as say Rules in Covent Garden and maybe for a Michelin starred restaurant, one should walk away commenting on service as much as the food, however the staff are accommodating and pleasant enough. I just felt much like other restaurants that service was at times a little awkward, the sommelier in particular. The wine list at the Social Eating House is fine although it could be better and although I was not expecting the wine list from Gavin Le Chappelle, I wanted the sommelier to be a little more knowledgeable and take a little more of a gamble on the wine choice. A bigger list of Bordeaux and some decent US pinot and zinfandels pitched at the price point which the Social Eating house is aiming at, would have been most welcome.

The a-la-carte menu is a small but wonderful example of intelligent cooking. It is seasonal and fish heavy, which by GLC standards is a good thing. I chose the raw swordfish in cucumber juice with ginger and lime syrup, pickled onion, sorrel and soy, with my fellow GLC’ers choosing from the smoked Lincolnshire eel, roasted fois gras and the Dorset crab; with all starters coming in at around the 12-13 pound mark. Each starter was placed about right in terms of the amount of food on offer. I found the raw swordfish beautifully offset by the lime and ginger and also very delicate without being overly rich. The same could be said for the eel. Eel can be hard to get right and dining at Arbutus on a prior GLC had shown us how well smoked eel can be done. In this case the eel again captured the right amount of smokiness and lay wonderfully against the potatoes which had been cooked in salt and vinegar. So far so good. However it was the main courses that had us most intrigued. I am a lover of John Dory, an expensive fish, and therefore not one that I often buy at home.   The pressure was on to do the fish justice and boy did the Social Eating house do this course justice. The John Dory arrived in tempura batter with a sauce of curried cauliflower and duck fat chips; essentially fish and chips with a twist. Living by seaside as I do, this GLCer knows a thing or two about decent fish and chips and is happy to report that the social eating house not only served up one of the best fish dishes since the GLC began, but probably one of the best fish dishes I have ever eaten! Some may say that taking a fish such as John Dory and treating it like fish and chips is not respecting this particular fish, but this is what I love about the Social Eating house, it is a social concept. The menu is designed to play with tradition and respect and gamble on something new. In this instance it certainly delivered and the curried cauliflower sauce was a joy to behold. We also went for the charred côte de porc with black pudding which whilst visually stunning, once cut into, evidently hadn’t been rested properly. It did not of course take away from the flavour however it did make for a rather bloody plate. Other dishes included the saltmarsh lamb with miso caramel as well as the roasted south coast hake and on the whole we found each dish both beautifully presented and perfectly portioned. Saying that, with our bellies full, we did also opt for the cheese board; an unusual choice by the GLC since the Social Eating house is not a French restaurant, but the now customary end of evening port tipple was quickly approaching. We ordered a bottle of port, as there was only one option which again harks back to my earlier point about poor wine choices but nonetheless, it ensured our evening ended well and as we left the confines of the dark but cosy social eating house for the late evening summer strains of the streets of Soho, it was evident that a well struck balance between comfort, ambience, pace and portion size had been met. The Social Eating House is but one of a series of portfolio restaurants owned by Jason Atherton. With mixed messages about Berners Tavern I would thoroughly recommend that readers of the Gentleman’s Luncheon Club check out this venue as an alternative. It is well situated in a great part of London and has managed that very unique selling point, within what is a very crowded space in restaurant land, and that is to market an evening that gives the casual diner with an extra bob or two in their back pocket the opportunity to eat clever and be constantly impressed but without the stigma that other restaurants may deliver within the Michelin star world.