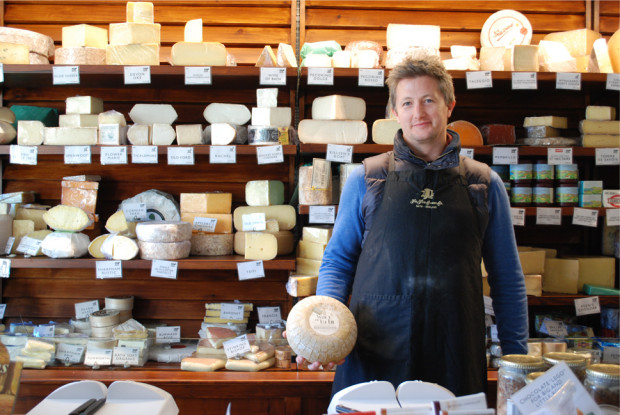 The Great British Cheeseboard by The Fine Cheese Company Every now and again the Gentlemen’s Luncheon Club gets lucky, which is exactly what happened when The Fine Cheese Company sent us a selection of British cheeses to try.

Being huge cheese-fans, we’ve been aware of the Fine Cheese Company for some time now. Especially as they focus on artisan cheeses, most of which are unpasteurised and all of which are traditionally made. They’re also independently owned by Ann-Marie Dyas who by her own admission is, “committed to the survival of traditional cheese-making, and to introducing farmhouse cheeses to as wide a public as possible.” So the question is; what precedes such a fine selection of cheeses? The answer is simple, a sizable slice of Aberdeen Angus and a stunning bottle of 1990 Sant-Julien generously bought for me by fellow GLC’er Phil. Thankfully our tactic of feeling moderately-full after the Aberdeen Angus worked, setting us up nicely for the main event. The Great British cheeseboard is a classic selection of four pasteurised and unpasteurised traditional cheeses. Being a big lover of goats cheese, I went for this one first. The Katherine washed rind goats cheese was firm, with a soft almost delicate flavour. This is in contrast to the sharpness and strength of flavor in the Hafod Welsh organic Cheddar, which had a harder, more brittle texture. Next came the slightly more subtle Richard III Wensleydale, a traditional cow-bound cows milk cheese which was buttery, rich and nutty (and probably our favourite, although it’s all too close to call). The Sharpham brie made from Jersey cows milk, finished the board off with an unbelievable buttery, creaminess. I really can’t recommend the Fine Cheese Company enough. Not only are their artisan cheeses full of flavour, but they leading the way in championing independent retailers and I love the fact that they say none of their products will ever be sold in a British supermarket. This is exactly the type of retailing that fuels our foodie passions and the Gentlemen’s Luncheon Club wholeheartedly supports the Fine Cheese Company (and all other artisans) as best we can. I’ll also make sure I order some quince for my next Fine Cheese treat!